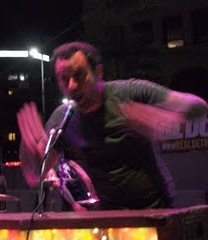 Yes, yes,... Halloween time in the city. I've just returned from the store, a bag full of individually wrapped plastic tubes filled with syrupy fake blood. Ready to be gruesome.

And the noble/novel venture of local musicians taking on other bands has grown almost intractable - there are half a dozen seasonal music masquerades happening around Detroit.

But, still, thankfully (as has been the case before), they're not all on the same night.

And so my mind drifts back to the night that really set this off, at least for me, -at least in terms of the traditional, store-bought-wig variety of theatrical band nights... Because, yes, there've been other evenings and alley-hidden arenas in the past that featured much more provacative, avant-garde costumed-escapist performances - be it the smoke-flumed sonic scabridity and cardboard squashing spills of Princess Dragon Mom or the midnight howlings of bedraggled garage rock from the Wolf Man Band.

But this is, we'll say, the more traditional route.

So, if I want to go back the night, the off-setting moment that got all bit all these Detroit bands with the Halloween bug - it'd be four years ago when Child Bite took on Nirvana - complete with three straw-blonde, brow-blurring wigs, striped sweaters and flannel - rampaging through an inevitably mosh-inspiring set of Incesticide ditties. I think we also saw the Strokes that year... But this Detroit quartet's Nirvana trip really sunk its teeth in...stays with me today.

So after three years, now going on four, the Crofoot Halloween show has always had one constant returning performer -

"Every year," said Child Bite singer/keyboardist/guitarist Shawn Knight (pictured-above), "we choose a band that not only we like (Rage Agaisnt The Machine 2009, Black Sabbath 2010), but that we know lots of other people like too. I think it's self indulgent and not-in-the-spirit of the event to do something obscure. We want maximum fun."

Plus, with their closing set, it just makes sense to take on a "big time artist" that would realistically be a headliner at any festival. Specificall....Nine Inch Nails.

"NIN have enough popular songs that we are physically capable of playing, and they are gnarly as hell."

But learning all those songs is a ton of work, even just for a half-hour set's worth. Still, CB (Sean Clancy, Brandon Sczomak and Ben Moore) "have a blast" each time. Being that band that's done it every year, and always closing the night gives them "a sense of belonging and pride. I like traditions, like the Hamtramck Blowout..." -which, CB has played each year since 06 - "...this is something people can count on us for, every year."

Taking on another band, whether it's Joy Division, Beck or Johnny Cash, can teach you something about yourself, in a weird blurring of identities and consciousness. "For being such a weird band," Knight said, "it's funny how naturally these 'normal' songs come to us."

(a "horror trailer" from a recent Child Bite tour - featuring Prussia - produced by Single Barrel Detroit)
~
Halloween aside, Child Bite finally secured a new van - as their previous transport was driven to death in classic road warrior fashion. "This one cost real money, not some Craigslist piece of shit. But it won't die anytime soon either. Her name is Kate Moss. Our old van was named Kathy Ireland, -named after a debate we had regarding her status as either a bikini-babe or a super-model (you decide). We bought Tyra Banks recently in Flint, but her underside was rusted to shit so we kicked her to the curb.

They've finally got a new drummer too, that being Ben Moore - who settles in after a year or so's worth of revolving percussionists. "Things will be a little different from earlier eras," Knight posits. "Expect future output to be louder, heavier! Our ears are giving out so we have to keep turning up."

A split EP with Baltimore's Dope Body will be out, likely in time for their show together, Nov 11th at the Loving Touch in Ferndale, plus a full CB-only-EP sometime in January-ish. There's also a "4-way Black Flag covers 7" vinyl" coming. Plus a tour. You know...
Posted by jeff milo at 9:51 AM