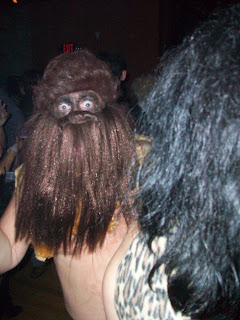 I scare Bjork when I tell her about Siri, ...how her smartphone is capable of complex thought. How technology will know, now, when you're trying to fuck with it - and fuck with you, right back...

But, Bjork had already scared me, earlier in the night, when she displayed her whisker-less jaw, her beard having been shaved hours before... 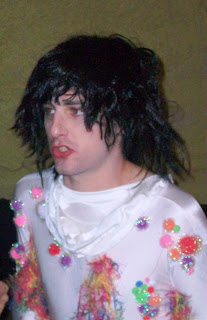 Thom Yorke's getting tipsy in a penguin suit and Beck's keepin' it cool like it's 1996 while Trent Reznor stomps the shit out of VHS cartridges, harvesting their magnetic intestines...

Upstairs, more than a thousand revelers are pact like sardines, the Crofoot stuffed like a crushed tin box...


...and this, these hurried images, is the closest I'll get to Detroit's dedicated interpreters, the cracked creative class, the dedicated post-everything troubadours as they dress up as a variety of musical icons, celebrating Halloween in some weird talent-show explosion of reverence -for the band's their embodying, but beyond that, for each other...

Apart from a zealous, must-win, shoulder juked shunt to the front row for Joy Division's set, I have opted to take  my chances for most of this Halloween Party (-the fourth annual of such covers-band showcases hosted at Pontiac's Crofoot, it's inspiring tribute moments framed, inevitably by Pabst-spilled crudeness, cleavage, coagulated blood and BO marination through latex body suits...). Mostly, I've buoyed myself in the middle of the dancefloors, rollicking along with the choppy seas of sozzled dancers, listeners, shouters and shakers...

No one was themselves.

The four most dynamic female vocalists (at least taken from the modest census of the Michigan indie/rock/pop scene) joined forces for a heartbreakingly-fleeting 30 minutes, to perform a set of Shirelles covers.

Huddled up by the sound guy, 200 ft back, I listened to Regan (of Pewter Cub) pour her heart into "Mama Said" while Dina (Secret Twins), Liz (Phantom Cats) and Jen (illymack) backed her up with perfect harmonies and theatrical side-stepped sways and jazz-hand accentuation. ﻿﻿ ﻿﻿﻿﻿


I craned my neck over hills of shoulders and spiky hair to hear it, had to get closer; foot traffic like battling quick sand, I squirmed down and through the channels of bodies - Such energy everywhere, so much of it, we waited for some maniacal match to be struck and held to the mylar balloon-full-fireball-spitting locusts... No one could move... What would/could happen when we boiled and bubbled over the edge, at the feet of Beck in the middle of "Black Tambourine."

Shirelles wrapping up, I sneaked to the side of the stage and ran into Michael Jackson (Chris Butterfield / Pink Lightning) and found the clean-shaven Bjork (Steve Puwalski / Pupils), next to his bassist, Jason Worden, himself moments away from pasting pastel designs onto his face...

I paced the room, wishing, (cursing?) that something so beautiful as these four intertwining voices, staggering enough on their own let alone united, risked being lost on so many of this roly-poly crowd sluicing distractedly through its four distinct performance-compartments... "This needs to happen again! This needs to be happening right down here, in smaller room, where we can all hear it, perfectly, perfectly," I stammered, right before bumping into the red-scarf-swathed Beck, circa his Loser days, (Bryan Lacker / Mister, in disguise).

I turned; DJ Ernie (Erno the Inferno) Guerra and I traded skunk-eyes, both of us not recognizing the other at first - he all slicked up in a suit, and me behind a goatee, eye patch and shock-white rat's nest wig. But there he was, sitting next to Jay-Z (Brent -Blaksmith- Smith) as they got ready for his set in the Crofoot cafe. 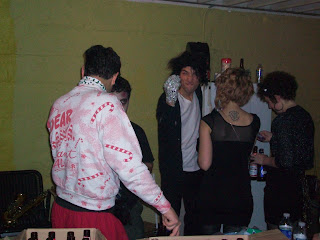 I laughed to myself that the backstage space, for cacophonous 20-minute blur, resembled the likely snap-shotted populace (and persona) of any regular ol' Lager House rock night or some Loving Touch special showcase... All the regulars of local rock's stages, whether hungry for beer or whether legitimately splashed to the curb of the backstage like flooded rain run-off, reverted to their unconscious comfort zone - each other.

And yet, this was just back stage. An anonymous thousand-or-so swarmed the rooms above, waiting to hear them... albeit not playing their own songs, but still - it's something that so many ears, minds and hearts had the potential to soak in so much local talent. No matter how much vodka these Elviras and Spidermans had slung back, their ears were exposed to the impassioned performances of a wide range of local bands. It sinks in... It goes beyond the novelty of NIN...
In that sense, it went beyond the sometimes begrudged and unavoidable small-turn-outs, week to week, for the bands here, who slog it out, commendably, each season, song upon song, persevering and honing their craft and continuing to release their own albums, to any one who wants to take a listen.

Look at how many got to listen to you last night... You couldn't move. I guess, I was thinking, I know what these bands are capable and what they sound like in their own right, their own voices, their own songs - it's something else to see them pull all this off... Maybe those packed into the thousand-plus crowd, who don't normally see them, will get bit with curiosity - like, what does Child Bite sound like, when they're not NIN? Come down and see! Why not? It could happen... miracles happen on Christmas, why the fuck not on Halloween, too? 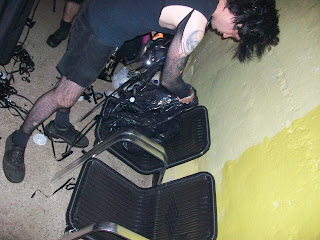 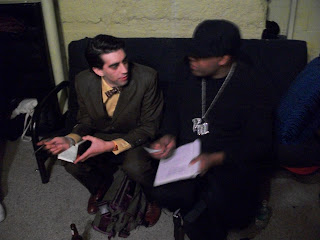 Speaking of Covers? Here's the heavenly re-imagining of Neutral Milk Hotel's "In the Aeroplane Over the Sea" - posted by Detroit's Phantasmagoria:


And so... Eventually, I got up to the front row, finally, for Joy Division (Oblisk), a cover set that I obnoxiously took credit for, having somewhat tricked singer/guitarist Asim into saying yes-to-it, with Creepy Cheapy' production manager, Phreddy, within ear shot, checking him off for it months ago.

Coy to the bitter end, Asim assured me he wasn't going to go over the top on some Ian Curtis-esque spasm. Lo and behold, he shaves his beard clean (the first time in four years) and half way through the keyed-up dance-rock run of "Transmission," his arms start windmilling dynamically, hips jittering a bit of a shake, eyes squinting, head rolling...just like the late post-punk trailblazer... And the crowd (and your writer) went fucking crazy... just as Asim explodes into the chorus 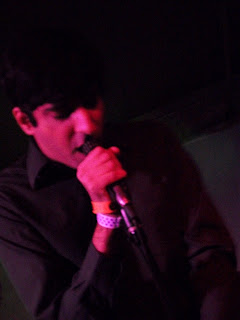 And that was a whole other part of it. Not just to lose yourself in costume, but to lose yourself in a whole other way - beyond the private transcendence wrought with one's headphones in your bedroom off on some lip-synched, cathartic wriggle through your favorite album, no, this was a chance for every musician to live as their favorite writers, singers, performers...﻿

And don't get me wrong, I'm all for killing one's idols... But it's something else when Tom Bahorski (Ashleys) is all done up like Ziggy Stardust and connecting to bassist Mike O'Connor (Fur) through the properly-paid tribute to a track like "Ashes to Ashes..." 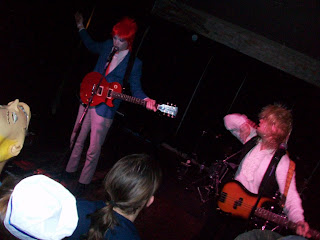 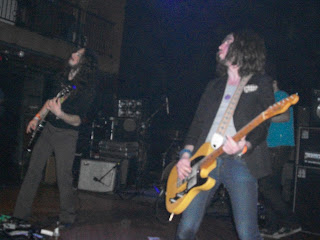 What I mean is, - Idol worship is one thing, and yes, that's certainly part of what went down last night - but we can't be so cynical as to ignore the connection that's made, when someone else flips over how good your Radiohead songs sounded, or how intense you were as Bjork... 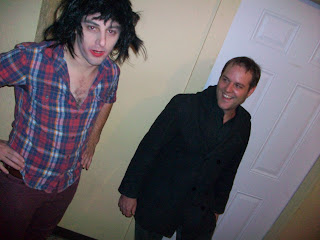