There are things to talk about - be constructive 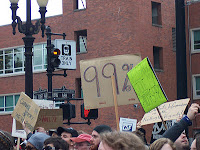 More on the Occupied...

Boston Public Radio's On Point broadcast a story yesterday, definitely one thing (among all) to be considered...

"What do they want? Where’s the movement headed?"

...Or check out the show's main site here to read the more than 1,700 listener comments...

Something happenin here, to be sure... Whether it's exactly clear, may be answered this weekend, locally, when we see if more Michigan cities, like Detroit?...join in on the movement... 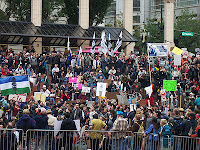 Rolling Stone reported that stalwart Rager-against-Machines, Tom Morello (currently known as "The Nightwatchmen") performed in Manhattan, today, to serenade the Occupiers: "Take it Easy, but Take it."

Indeed...
Where is this movement headed?

For further ruminations upon music, particularly it being the primary outlet for crystallizing and communicating man's guttural growl of general objection, I'd recommend a book I've been reading, myself - (In fact, it's author, Dorian Linskey, recently blogged about the Occupy Movement.

Linskey, who writes for the Guardian, is careful not to glorify the protest-song or the protest-singer, calling many of its hacks and hockers as "didactic" and not dancing around the risk of being derivative or contrived...

He quickly shifts to the more profound works like Holliday's "Strange Fruit," marking it as the point in history (1939) when protest songs began working their way into the mainstream, away from picket lines.

Done right, at the right time, with the right words, one can spark true inspiration and speak for the dozen, two dozen, or two hundred that are marching around you...

Music may be the ultimate, or at least quickest/most-cathartic... art of the protest -
a spasm back against that certain ache in his neck, his feet, his heart, that he just can't ignore anymore - whether it's dejection or disenfranchisement... You can all hear the words, coaxing with their melody but barbed with their message and you can all hear the warm rich timbre of the acoustic guitar, the tambourine, the shuffling feat - entices you - more than the denser abstractions of film or painting -