There's more music in the world than any one person can digest, as you know... 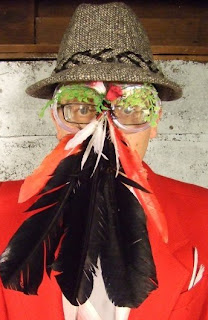 Dave Lawson spends his days dreaming up playlists, -spends his nights shuffling sheaths of vinyl together into a crate, then heads out to a pool hall, where, between pints of Porters, he quizzes himself on music.

Not necessarily just -which song to play next..., but which song will fit best , which will match or meld itself to the styles and personality of his "special guest DJ..."

So goes the formula of his all-vinyl DJ series, Tuesdays In The Forest (inherited six months back from local wax-fanatic/poet/drummer Richie Wolhfiel) - And tonight, the Forest becomes overrun by Zombies - for Zombie Dance Party 8.

Mr. Lawson, who also writes and records with hook-and-harmony preservationist group, The Pop Project, had only just figured out what-he-was-going-to-be-for-Halloween, yesterday afternoon. "I seem to do pretty well (each year)," he admits. "I never really plan it out; often, like with picking out records, you just work with what you have and as time approaches -you start thinking more and more..."

And then you just play (it).

This year's Zombie Dance Party is hosted in Ferndale for the first time in seven years, after six years spent down in Detroit venues, it's transition north is similar to another music fest, The Blue Moon In June, -which was also at the Loving Touch.

"Ferndale definitely seems to be the suburb of the creative class," Lawson said, "so that makes sense that that (those transitions) would happen."

ZDP instigator and host, Carey Gustafson, submitted that Halloween in Detroit is just too vibrant of a happening - something at MOCAD, something at Theatre Bizarre - all happening so close together, -that audiences can become torn. Why not just throw it in the suburbs again?

"I think it's really moved to Ferndale," said Lawson, "because of (Forest) nights that Carey and I have been doing and sort of realizing that it just makes sense to support those..."

The Pop Project, meanwhile, recently returned from Minneapolis, where they were recording their follow-up to 2008's Stars of Stage and Screen.  Lawson described the new batch of 15 songs as "a step further down the road towards kind of funkier material that we touched on a bit with Stars, some of the more 80's-inspired stuff. But, at the same time, there's other stuff that isn't anything like that. We (with Zach Curd, Will Yates and Adam Kempa) just more comfortable than ever dabbling in different genres and not even worrying about what our sound is...what the band is...we just enjoy playing different types of music as we do it."

And so - let the hecticness of Halloween commence, tonight, with Zombie Dance Party - sneaking in, early this week, before all the bigger explosions of weekend parties.

Tonight will feature The Beggars and "The Monks" (cover band), the latter of whom performed for the first time at the Lager House last weekend - stacked into a bill that featured a number of enthusiastic cover bands - including local prog-dashed baroque-pop group Computer Perfection interpretting UK's legendary ambient/dream-pop group Broadcast... The rewarding thing about that, for the listener/audience is, whether it's brilliant or a bomb, it inevitably leads you to pick up some of your old favorite records and dive back in -

So, then, zombify yourself and boogie-for-all-your worth, -utilize this still-yet-tolerable weather, not too cold yet that one could survive the outdoor air with whatever kind of shredded-up undead costume you choose to don
...because it'll be "winter soon" enough.