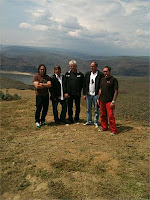 You can't write it better "keepin-it-old-school" cliche stories than this one
- not only did Guided By Voices, renowned lo-fi indie-rock kings of Dayton OH, reunite their "classic" line up (that being the integral recording/touring members to their most celebrated era of releases) - but they recorded their new album (their first proper since their initial ostensible 'swan song' in 04's Half Smiles of the Decomposed), inside a garage!

No studio for the lo-fi lords - they opted for plugging in and tracking inside the living rooms of friends and the basements of former band members.

Twenty one new songs are on the way from these valiant trebble-kickers of two-minute-pop-masterpieces. Let's Go Eat The Factory dawns on Jan 1st, 2012 - via GBV Inc!

Early forecasts assure enthusiasts of this "classic" era that they won't be dissappointed - and yet, there's reports of more synthesizers?--even utilizing samples-- on this new one, which features a track called "Doughnut for a Snowman," something lead singer/writer Bob Pollard considers "the goofiest, twinkliest song I've ever written..."

Stay tuned.
~
On the local shores 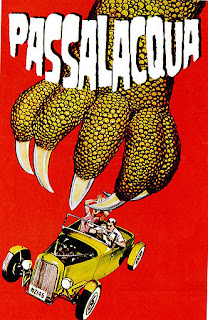 Detroit hip/hop duo Passalacqua have their 2nd release ready -just in time for their scheduled slot on a CMJ showcase - Zebahazy  Summer drops sometime next week. Wonder-boys Blaksmith and Mister perched and poetically promulgate their latest raps in front of the cameras of local production crew Throwback Media - trading off a preview of tracks (below).