Electropic Hipto-fuzznomical Releases with soul, with synth, with rhymes, with...

Just firing off a quick blog post, dear readers, before I get to some other mad rant that, itself, may or may  not see the light of day -

DIAL81 have a batch of left-field hip/hop blended to weird, fresh new takes on ambient/trip-hop and cerebral space-pop - yes - that's a lot - but you kinda get the idea, listening to a track like this:
RocK Climbing w Soft hAIR ft. AJ Sherman by DIAL81

Now then, DIAL81 (otherwise known as Blair French,) is releasing an album (er, "series" - the SweatSHopDeluXXXe series) - this coming Saturday - at the Magic Stick, paired with raw, funk-pop provacateur Beverly Fre$h (dig on "Half a Haircut" here), who, himself, is also releasing recorded work - Bed (LP on Vinyl)... French is also to be joined by musical contemporaries/collaborators: Level Jumpers, Dan Haddad, D.Allie, and Mobil... - - - But that's not all! See and hear these fine performers/writers/singers/rappers/musical-dabblers: Intricate Dialect / Sun Hammer, with a trio of DJs:  Jefferson / Love Terrorist / Frankie Bank$! 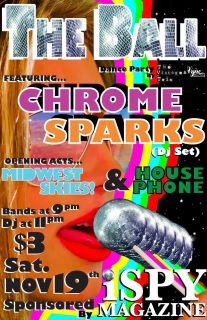 But, then, that same Saturday - if you're not in Detroit - if you're out west - maybe in Ypsilanti or Ann Arbor? Might I recommend this young synth-pop atmosFuturoso composoer - Jeremy Malvin - otherwise known as Chrome Sparks - who will be DJing The Ball - a Dance Party hosted by The Vintage Twin & Vyne Records and sponsored by iSpy Magazine... Detroit's soul-ish, jazz-ish, hinted-hip/hop-ish amalgam otherwise known as House Phone will be performing along with Grand Rapids-based pop punk trio Midwest Skies -


It's in the back of the vintage shop - find your info here - and there'll be no alcohol, deal with it.