...are upon us...
and Patrick Davy & the Ghosts, though they'd sung of Summer Moons' earlier in the year, are making sure they're weatherized, settling in for winter, early, with the warming sounds from their latest LP, packed with their riff-heavy, Americana-flared, ballady indie-rock... somewhere between the theatrico-pop of Arcade Fire and the more scuffed, Rustbelt-marked guitar shreds of a Brendan Benson, lies the anthemic vibes of this up and coming Detroit trio... Their album release, for First Cold Nights, is this weekend at PJ's Lager House.... (it's also, subsequently, their bassist's birthday...) 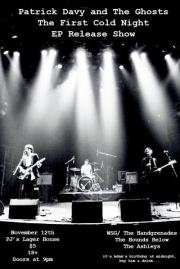 Yes, Davy, and the rest of the new school of pop troubadours turn out to be harmony and hook preservationists (much like their bill mates for the release party of The First Cold Night, The HandGrenades), but unlike that more BritPop-leaning quartet, the Ghosts dig a bit more on intricate guitar flourishes for added atmospherics - which would align them to, again, another bill mate, the Ashleys.

Added to the line up is Jason Stollsteimer, more elder statesman in this bunch, with his Hounds Below.

That's Saturday - just when you thought things would stay quiet, what with Halloween over and Thanksgiving eve more than two weeks away -
Posted by jeff milo at 7:33 PM