The world moves too fast. I feel like I havne't gotten a chance to really sit with any records, properly. Not enough coffee to keep me keyed up... keying in... Breathing now... listening...Back to the Kinks first record, back to Bowie's Station to Station... Digging back into myriad pièces de résistance from handfuls of praised auteurs whose pedastols only get higher, year in and year out...

Like, Moby Dick... I'd never read any Melville before - and it's been rewarding stumbling onto such passages:"The classification of the constituents of a chaos, nothing less... is here essayed"

When else am I going to find the time to read Melville, when Blog-World just wants me to keep lunging for what's next...

The new HurryCulture has created a strange filter - The well established legends, regardless of their level of legitimized profundity, whether they're Bowie, or Melville, or Big Bird, or Radiohead, Jay Z or Gary Numan, Michael Stipe or Michael Jackson... made it through before the Internet screen went up... And ever since, we've had ostensibly indie-acts coming up being pigeonholed as "buzz-bands..." The tacit suggestion being that said-buzz offers precious time...before you're sluiced back out through the filter.

And Ziggy Stardust and Captain Ahab's shadows grow taller and darker, on the other side. 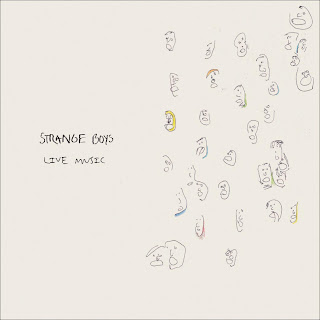 That's just one way of looking at it... (I shouldn't type straight out of the day job, on only half-doses of coffee...)

Another way to see it, meanwhile, would be to ask: when and how else would I have been able to come across a band like Thee Oh Sees...or Still Corners? Without my sloshing around the hyper-percolating, song-screaming/mp3-streaming echo chambers of the Internet...

Dig the London dream-pop-deconstructionists, bringing in warm organs and surfy-guitars onto an autmnal, hazy stovetop, where it simmers into near noise-pop crescendos of dizzy catharsis... (Their new album, which probably makes my '11-list is Creatures of an Hour on SubPop).


Or, Texas-punk-blues boys, of the Strange variety, are probably having a tough time from the music press since their album title Live Music ...is likely pronounced differently than any reader's initial inclination (...rhyme-it with "give..." ) Sound advice: LIVE music.
They stopped by Noisevox, whilst in New York, over Thanksgiving - and got interviewed... Watch that here, if you please.


Their latest (which, again, now that I think about it with a listen, is an '11-candidate) is available through Rough Trade.

But let's bring it back to Detroit.......
It's Wednesday (as I write this) and that means, that, like always (or, like such a notable amount of weeks-steady) local multifaceted/multi-quirked MC Doc Illingsworth, in all his shimmering, glistening glory, has posted another thoughtful, charming video... Wherein, along with Rufio Jones and Sean Uppercut, they come to terms with bread acting as legal tender for up and coming independent music artists... what a world.


Where was I going with this post, to being with, anyhow?