People Who Live In Paper Houses...

Somewhat of an Interview - with the Ferdy Mayne:

...A new place to go for live music, The Paper House, will open its doors tonight, helmed by a handful of dudes who know what they're doing when it comes to lively, off-the-beaten-path-parties culling quirky, cool, iconoclastic performers.

Its places and nights like these that fuel the hyperbole of ad-campaign-esque sonnets singing the potential of this city, based upon its vigorous underground arts scene.


Just like ScrummageVision before it, (and various other Scrummage incarnations long before that, as well), Paper House could be the new music mill for those seeking out a refreshing revue of unconventional and avant garde artists who might be slipping under the radar of the bigger clubs. With ScrummageVision closing down two days ago, the Paper House, ostensibly inherits that torch, or at least is flecked with its embers. Much like the city's other alternative venues, past/present that have either thrived or blipped from within re- store-fronts, lofts or warehouses, the Paper House has its fire's lit by a batch of 20-somethings with -energy, -vision and -camaraderie. And, oh yes, potential. 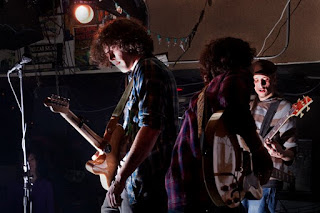 But before I re-type that same old hyperbolic rave for our general edgey-ness, I stated typing out this blog post because of the new venue's first line up -

--which, included with up-and-coming post-space-rock/post-acid-jazz quartet Rough House, (who manage to impress even inside cramped living rooms), is headlined by the once dance-pop-pigeonholed/and-now-ever-evolving music project of Randy Chabot, i.e. Deastro, along with Scrummage-born electro/noise/rock-experimenters Lord Scrummage and Slufter. There's also The Kodaks, Butter Wolf, Palaver ...and a DJ duo...

A late entry to this bill was The Ferrdy Mayne, a name not as frequently plastered across ad-nauseum Facebook invites as other local bands, mostly due to the band, (spearheaded by vagabond-ish singer/songwriter Shane Firek) having spent the last year steadily re-potting his(/its) roots back into the Detroit music scene after spending a year or so down south in Nashville. For a minute there, they(/Firek) were a prominent element of the Ypsilanti music scene (coming up in 07 alongside comrades like Lightning Love), only to then fade in and out upon Firek's frequent returns. And now, again...

In a way, Firek's Ferdy-flares mirrored the all too fleeting (but often necessary/unavoidable) transience of these above-hallowed^ alternative venues. Which, having been swooned by the gristly, gargled swoon and gloom of his dark, twangy music, a whiskey-shot Americana, gaunt and profound but fractured upon its landing in the clotted cradle of urban gutters, made it that much harder to accept the band's somewhat start-and-stop status, heretofore.

But the band was never put on hold - as long as Firek wrote, it lived. And it was that writing, the lyrics, not just their throaty, quavering delivery, but the words, that can be the most striking about their songs. "It is an entity onto itself," he said, "(its) solidifying and we'll write more soon. It is fun. We enjoy fun."


Colin Birkett, Matthew Allen-John Mathis and Derek Scobie join Firek in this current incarnation. "The Nashville situation," as he calls it, "gave everyone that was involved in the project a time to grow and learn. I'm back because it didn't work out."

"(Paper House) is going to be big..." said Firek, "I'm proud of everyone and they work hard so they deserve a prideful high five..."

"Detroit is amazing," Firek surmises, happy to be back. "Ypsilanti and Ann Arbor are my home. Some play punk, such as Slaves to the Pavement and SNAFU. Others do what they please, such as The Real Spicolis, The Wolfs and Metemphycosis. Others are on their way soon, such as The Juliets and Lightning Love."

"...I love them all. They are all my best friends and I want to play as many shows as possible with them, you know?