A close-up to the far-out...
Charlie Slick (and Thunda Clap)'s Farout Indian

Sunday morning...and all bets are off... already awake despite running around the town last night...

Headphones and Charlie Slick's new album - and plenty of coffee...

~
“I wanted to show my range,” Slick says, for his newest album, Farout Indian, “I just happened to use electronic equipment (in song creation), I don’t prefer it, necessarily to acoustic instrumentation. (Indian) is my big movement towards not-being an electronic musician..."

Whatever the world, or Michigan, thinks of Charlie Slick, (glitter-soaked pied piper of wild, winsome laser light parties) doesn't seem to hold up against many of these nuanced space-rock tracks, much more fully realized and substantially layered with more eclectic instrumentation, here, on Indian. Less hyper -with heavier grooves, fuller grooves, with back up vocals bolstered by bass and synthesizers slowly shimmying together.

He tells me he wants to go for a Funkadelic kind of vibe here - and I can hear it on a track like: "Dance Like You're Ten..." 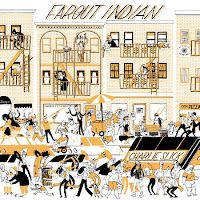 But all this is not a night-and-day switch, we'd seem some of these sides finally coming out on his last record...a steady "re-branding..." He'd gone into more of a funk side on Elron Hubbard (from last summer). "But, it was more like Rick James-esque funk," Slick says, "then, this record, I feel like I get closer to Prince or George Clinton...But at the same time, there's a lot of this weird guitar sound that I use (from an instrument he invented called The Jerk), which mixes in sort of that rock aspect..."

"Nomads On The Planes of Time'...that's the most mellow song on the record...it's a song that I wrote on the acoustic guitar and filled out with a lot of vocals and cool keyboard-y stuff. My friend, Johnny Ill, he played these rototom drums in the background, these little rolls on rototoms and I remember finishing that song and thinking: God, no one has ever heard this on a Slick album...

"...that comes right after the song "Funn" -which is this really funky and weird, dancey thing... And then Nomad is this washy, epic, almost like a prayer-type song...Then the very next track is an instrumental. And of course "Rush" is probably as close as I get to industrial rock.

And then there's "Man With the Keys" - the only time I've been tempted to use the words, haunting, grimy guitar-heavy, ballad -with a Slick song.)

This is the album where Slick opens himself up - not overtly autobiographical in lyrics - but displaying his musical breadth as a song writer, as a song imaginer...as he is an incorrigible tinkerer, dreamer, inventor (look at his guitar, look at his steering-wheel bass modulator, his light system)... Listening to this album is the chance to get to know, better, the man who's often not out at the bars, scene-ing it up...
"I think that it's no mystery that I'm not really apart of the music scene," Slick says, "I just kind of always do my own thing, in my own world. I'm in the basement, doing my own thing - there's good things and bad things about that."
"It's not anything on purpose...I'm just in my own world."


Spend some time with his tribe...and you might find you want to roll with him... - Nov 18 - Woodruff's in Ypsilanti - Album Release Show - with: Johnny Ill Band & GoLab