Random bits:
► Magnet Magazine hath resurrected it-self... Returning this autumn with its first PRINT issues, in a while, featuring interviews with Wilco (that band responsible for this song...) and Guided By Voices - similarly resurrected indie-staples who are building themselves (back) up for their first new album's worth of material in a good chunk of years - bolstered by it's "classic" ("mid-90's") line up...

Is there, then, at least some hope for other magazines, like Paste? Who once were found (on newsstands, in print) but now are lost to the digital-only displays of their Internet pages? Do you really wanna do everything, including read your music related culture writing, on a computer? Sure, that's what you're doing now... But, I mean, do you wanna do everything with this ominous contraption?


► In The Aeroplane Over the Sea (by Neutral Milk Hotel) is an album that'd be old enough to drive its own ironic wood paneled station wagon, by now, and yet, its command upon the hearts, minds and tastes of ostensible tastemakers and heartheavy post-Internet alterna-culture-ites is still considerable. It's just one of those indie-rock bible kind of albums... like Pavement, Guided By Voices, Daniel Johnston, or somewhat more overt, the Pixies, its just something you gotta know about, otherwise you'll be laughed out of the trendy tavern and used record shop, like-fast! (Say, heard this yet?)

► But wait, Michigan, there's more...
Some of your home bred talent are churning out some new music on the Internet this week - and it's not from Detroit, nay, it's from Ypsilanti...

Sisters Of Your Sunshine Vapor, recently establishing their own studio space for self-production, have released an LP, Spectra Spirit, that ups the haunt and howl of their hazily wrung-and-unwound psychedelic sounds, -still present is their penchant for utilizing the full range of timbre from their guitars, dazzling cascades of electric growls, varying caustic and mellifluous, spurred by pedals that loop riffs upon themselves or sometimes in reverse, while the rhythms trounce along sensibly, facilitating the necessary spooky, seancey marches ("Center of a Velvet Room") or more tumbling, wavy grooves ("Live In My Mind"). Beautiful broods and spooky psychedelic dirges - when the band kicks it into high gear on its closer "Green Eyes and Dream" it communicates the synchronicity that's steadily built between the trio of players - buoyed now, no doubt, more so, by the creative galvanization of their own studio space, with their own bassist at the boards.
Find it here. 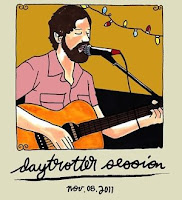 And now, they've put down some tracks on the sonic rest-stop of the nation, Daytrotter - with a session posted just today - check it out.
Posted by jeff milo at 2:22 PM