How to Succeed in Beeswax

Varying sentiments echoed the same essential appraisal: Yeah, that sounds like a good idea...
I remember picking the brains of other local musicians when Beehive first got started...
Yeah, I think that's kinda the way to go, these days... or I like it... or I'm not sure what the best way to go about music in the Internet age is, yet, but this seems to be a cool way to do it... 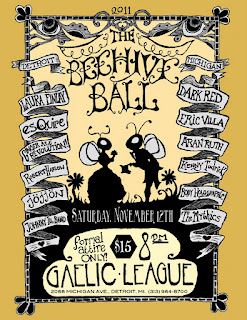 Detroit's Beehive Recording Co., launched five years ago by local music maven and perennial band-er, Steve Nawara, aimed to recreate what Italy Records had initially set to, back "in the 'garage days,'" by unifying and propping the albums of local talent, only this time, cutting back on the inherently high and hindering production costs (studios, vinyl pressing) and going "web-based."

Beehive Artists released their tunes online, often as singles or 3-song EPs, paired with artwork and bio's, $ from the downloads would be pooled towards financing eventual physical formats of said-recordings. As an adhoc label, Beehive offered its artists a 50-50 split, providing songwriters the freedom to put whatever song (be it a solo side project thing or some other experimental project for another band) up for Internet-ears to-hear, while its listeners get user accounts much like a mini-iTunes.


But, for the last year, Beehive has gone "free and open" to its members. Online seekers could come stream for free with the hopes that we all continue to support the artists as well as this unconventional label, when the time came... (Thus, why not throw a Ball?^)

To date, Beehive's culled 2,500 members(/listeners) and posted 37 singles recorded by Detroit area musicians. By year's end, it'll pass 10,000 downloads from its site, with no artist having been charded to record in the Beehive studio.

Dark Red, Aran Ruth, Deleano Acevedo, Bad Party, and Duane the Teenage Weirdo were some of this year's Beehive highlights.


As the Internet fliers echo - this is a formal event, so leave your denim, moccasins and faded vintage T's at home, folks... I, personally, would encourage bowties and fish nets... $15 at the door, or find them online - or at your local record stores (UHF in Royal Oak, People's in Detroit). -more info
Posted by jeff milo at 6:38 AM