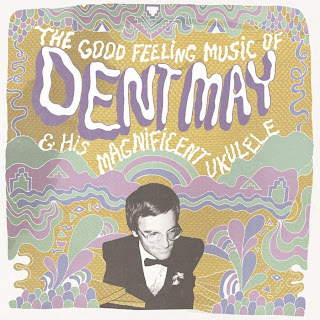 
The Feel Good Songs of Dent May and his Magnificent Ukulele

The bow-tied tux on the front cover doesn't help dissuade the inevitable imagery of singer Dent May shuffling around on a tiny round stage in the corner of some jazz-age juke-joint, crooning away to some doe-eyed flappers, (see "Meet Me In The Garden").

The debut album from this Oxford, Miss-bred singer/songwriter seems to always have that unimposing lounge-y cuteness flavor dabbed into its edges. Assuredly, that Magnificient Ukulele indicated in the title brazenly strums its way along ("Oh Paris!") with brass booms and cheery marches that facilitate an almost McCartney-an pop shuffle. Later on, the pedal-steel struts its twangy whine ("Howard") over this classic-country slow dancer that finds Mays syrupy vocals recalling the relatable whirr of Billy Bragg.

The two potential factors working against his winning over the designer-glasses/doc-martin college crowd is his undoubtedly endearing-yet-possibly-over-the-top cuteness; he unabashedly embraces the kitchy "magnificient" and "good feeling" in his titling of this debut and singing mod-for-the-moment witty wisdoms in the give-up-and-dim-the-party-lights jangle "You Can't Force a Dance Party"). Secondly, for some, this may ring a bit too closely to 69 Love Songs­-era Magnetic Fields, in both its ukulele-dominated swing-revivalism and May's similar vocals to antecedent indie/crooner Stephen Merritt. He throws in his own distinct style of narrative and charming sense of humor – but these quirks and sweet string accoutrements then start to inevitably recall a bit of Jens Lekman dark-comic pop.

Ah well – a band comes out with nothing yet on the score sheets for the writers and readers to qualify him…and you can't avoid these quick one-liners: Magnetic Fields meets Jens Lekman…with hints of Serge Gainsborough and Lee Hazelwood-style country. Of course, as a debut, this is highly impressive. May was sort of discovered by Animal Collective last year, and the experimental space-folksters released this album on their label, Paw Tracks. If May keeps his collar straight and continues working and singing his way through the dim lounges of our hearts over the next couple albums – then he should be well on his way to a fine career. He's opened a lot of doors to a very intriguing rooms of style and sensibility on this record – let's inhabit them more fully on the next twirl around. And we can all catch that "Dent May-nia" that those gin-ed up juke-jointin' College Town Boys keep yapping about… 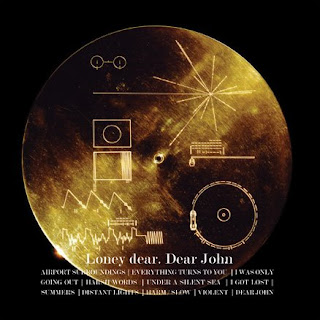 It starts in a hurry. It hits…like much of Loney, Dear's synthy-stringy-fuzzy-folk…softly, but it still feels urgent. A rolling bass line blurts right out of the gate and slides under this stifled-crashing dance-beat that pulses like some over-caffeinated businessman at midnight, wielding his way into the loading zone of these "Airport Surroundings" in Dear, John's opener. Perky but histrionic strings pizzicato out and around like flapping papers in the wind while twinkling synths flutter upon the rushing, softly-piercing nasal na-na-naas of singer Emil Svanängen. It's full of cinematic wonder, but it feels blunted and blurry – like you can feel its potential to coax you up and around the room, you can see all sorts of starstruck city skylines at night for this would-be ideal nighttime driving music.

Second track "Everything Turns To You" starts in a similarly jolting fashion – like your falling into something already in progress, or what feels like the picking-up-the-action after a chapter-break (or a film soundtrack); as the first word of the first lyric is "…and…" …everything turns to you. What needs to be emphasized with this track (as should be with his 05 release Loney Noir and its pique track "I Am John") is that Svanängen has a knack for wordless wispy melodies that are highly catchy and form a soothing ambience.

Svanängen comes from the same chamber-pop loving sensibility as Belle & Sebastian, (picture the aspiring singer/songwriter in his parent's basement in the early 00's, at the edge of his bed with a guitar and a nearby drum machine) who caught a break, similar to his more faux-lounge-crooning pop weaving compatriot Jens Lekman, when someone at Sub Pop found his humble but inviting demos. He loves the flush of synthesized strings throwing fuzzy flashback effects upon his movie screen millieu’s sunny projection. His shy stumbly pop songs are often striking and moody, sliding quite comfortably between this heartfelt syrupy-meets-meloncholy folk that Cat Stevens or Paul Simon brought, but also undeniably touched by the orchestral cocktail party sway of smooth Burt Bacharach-style pop – then tumble it around with the new march of indie-theatrical styler's like Arcade Fire and you'll find yourself in the steady flight-n-fancy of Loney Dear…
mp3