Hold A Second (or Third) Time: The Walking Beat 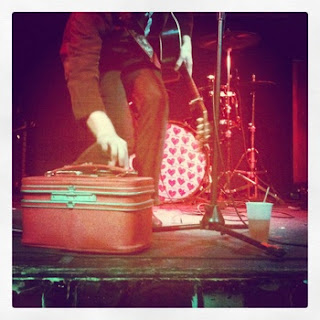 Blowout is, well, essentially... upon us. For some bands, this is their first Blowout...for others, their 12th...but for others, yet, still...it's their first show ever...

Like, for The Walking Beat... -first show as-a-band, rather.

Singer/songwriter Steve McCauley whirled his way through a year's worth of collaborative experiments in the wake of his main project, Scarlet Oaks' dismantling after three solid years...and two EPs...and three bassists...and two guitarists...and... Before that, he was playing with his brother Patrick in Fifth Period Fever.

"This time," says McCauley, "I feel like this...might be my last real band."

I raise an eyebrow and take an inquisitive drawn out sip from the coffee mug, waiting...

"Eventually you gotta grow up, right?"

...which gave birth to this new band, called The Walking Beat - featuring his longtime friend and drummer Daniel Kanka on drums, Jesse Paris Smith (of Belle Ghoul) on keys and Matt Van on drums.

It took McCauley this long to get another proper band to back his own songs because he was searching for that right mixture of people who were putting music first in their lives... A specific blend of folks that never settled together in Scarlet Oaks.

"If it's my last band, I wanted to do it right..." And that includes staid strings of rehearsing and focusing on recording some songs before jumping into the live-show carousel (another somewhat regret of his, back when he first sparked Scarlet back in 2007).

"My worst quality is impatience..." Or at least, it has been. Over coffee and tea, on a chilly gray morning, just three weeks before Blowout, McCauley is sounding more sure than he ever has - perhaps he's gotten some soul searching done over this past year of recording (Computer Perfection in his home studio) and the occasional guitar-slung stool strumming set at joints like Steak Hut.

The rehearsals and song development have had a nice flow, each member is respectful but not afraid to offer constructive criticism. "So far there's a good dynamic, no one gets offended..."

Cuz you're all adults?

"...hopefully. -All real musicians, at least. In Scarlet Oaks it wasn't about being prolific, there were great dynamics in it, too. I've always liked music to be simple--who wants to hear a drummer just doing a solo? I've always had more of a punk rock take, -simple, stripped down; that's how it was in ScOk, except for James, who could play circles around me, but he didn't...which was really nice."

Everyone in this band "has always put music first in their lives." From every aspect, whether that's diligent rehearsals, impassioned songwriting, or amassing (and, sometimes selling-off-for-scratch) stacks of audio equipment.

And that lifestyle, "that's hard to do...you have to sacrifice a lot in terms of comfort and wealth..."


Whereas Scarlet dabbled in a dusky Americana sound and whereas he's been jamming on more of a traditional country-twang thing with James at the Steak Hut sets, McCauley says that the Walking Beat's been taking him more into the realm of rock n' roll. That...and it's just great to have a piano, particularly the talents of Smith, intertwining with the rhythmic sensibilities of Van and Kanka.

"I'm actually like the worst musician among the band," McCauley lets an easy, self-deprecating chuckle tumble out. "Everyone in this group is a real musician and it's been amazing playing with people like that..."


--So you're technically the lead guitarist?

"I know...hehe...it's terrible. But, I've been practicing. I never wanted a guitar-heavy band, I wanted it to be -rock- but not super heavy electric."

How do you not wind up with a traditional rock n' roll vibe when you're name is somewhat inspired by a Bill Haley (and his Comets)'s tune?

"I find it hard to write straight kinda' songs, straight mid-tempo songs; but I gravitate toward that sort of walking-tempo, that slow-swing, it seems to be where I write best. Though I've been trying to defy that; one has his own conventions and you want to defy those with every new song you write, you have to learn new tricks, but not get too away from yourself. That's the trick. You have to constantly evolve but not sound like you're pandering... I don't even know what's hip, I'm still stuck in the 60's or something, I guess..."

Oh, Steve, what's hip anymore? Everything and nothing all at once is all hip now...

"It does seem that way. I see young kids dressed in flannels with long hair and laugh, thinking that's weird, that went out of style when I was in high school... Everything's just a sub-genre, broken up into tinier pieces, tinier stuff."

All of it spread out across this city...

"Yeah, a lot of different things, all going on at once around here. I don't know where (The Walking Beat) fits, though..."

But again - if this is your last band, then do it right...

So a 7" single will be out in time for their Blowout performance (Wednesday, February 28th, at the Magic Stick, early). And then, whilst keeping an eye to getting out onto the road, they'll set down to recording their first proper album...