Go Back Where I Started From... (Blonde Album)


Soon enough, this album will be out and you'll be able to hear the nervy piano punches and dazzling double-track vocals harmonizing a haaaaaa-AHHH's over stutter-step percussion and teased along by wistful wispy vocals swaying through a sad/sweet melody. 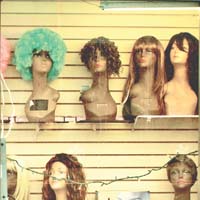 The song's called "Just Friends" by a band called Lightning Love and it's on an album titled The Blonde Album and it won't be out for a just a little while, yet, (due August 28th)...

But if we've waited this long (3 ½ years since their last full-length, November Birthday), let's let the summer burn itself out and thus treat ourselves with a few final shots of sunshine from this Ypsi-trio, with their syrupy punches to the gut and hearts worn self-consciously on frayed sleeves.


Said-song above^ likely won't be a single, but you can stream this, in the meantime:Listen: Lightning Love - "Deadbeat"


In a time when I'm wondering just why the hell I still write on this blog, this album comes along and reignites something. It's simple, it strikes right to the core, the Id's guttural bite or soothed acclamation; this, this... is what your narrator was feeling, right then and there at the moment the word was written down onto a page that sat crumpled at the tip of a piano. No esoteric allegories or cliched poetical dressing-up, this is how it's seen, put to breezy, sashaying melodies and charged forth by strutting, slinky-slammed percussion. Guitar meets piano meets wispy, longing lullaby vocals. In- -out, two minutes, maybe three... the album stops, the melodies stay...and stay... Simple. Struck. 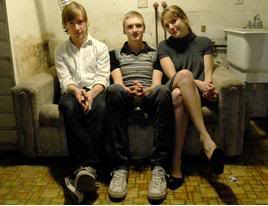 There's no pedal-steel or theremin, no screaming, no feedback (well, not that much feedback). It's the personal pop album that the trio have been working towards, steadily...oh so steadily, for three-ish years now. It's not that it's nostalgic, so to speak. Not nostalgic on some -oh it's a throw-back to good old twee-pop-level or nostalgic on some -hey-look, weird man, weird, I wrote about this band four years ago on this same blog- but still, nostalgic in a way...
...that this music, ebullient pop music, with its inevitable sparks, makes one feel young again. Even if you aren't yet 30, the swirly-slide up-and-at-em-ness of these melodies takes you back...somewhere.