Frontier Ruckus Open It Up

This weekend, Michigan music-poets Frontier Ruckus release their grandest recorded statement: Eternity of Dimming. They celebrate the double-vinyl album (spanning 20 songs and nearly 90 minutes) with a performance at the 36th Annual Ann Arbor Folk Festival (at the Hill Auditorium on the U-M campus).


An Interview with Matthew Milia


Dimming will prove to be "the apotheosis" of their characteristic haunting-nostalgia, as sweeping and cinematic, likely more so, than their first two albums' already-pressingly-poignant, head-spinning coils of richly jangled folk-rock jaunts into deep dark forests of memory's murk, of Michigan's geographic viscera, of their own nervous nightminds.

Mentally exploring the glorious phantasmagoria, through song. Mythologizing -through-melody- the supernatural charms inherent to coming-of-age in the Mitten.


"...you get used to answering the same questions a lot," said singer/songwriter/guitarist Matthew Milia of the consistent querying the band receive out on their consistent tours, listeners curious about all the various locales, freeways, parks and ponds dotting the maps of Frontier Ruckus' canon.

"The whole "Orion" concept was a big enigma to people, geographically, it seems," Milia said of their 2008 batch of knotty nocturnes, The Orion Songbook. "I could tell how far from Michigan I was in a given moment by how the person would say the word, like the constellation or lake Lake Orion as it's supposed to be. The word "Or-eeeeee-un" itself is so Michigan-nasal-sounding to me and beautiful."

On that first album, "Orion Town" is mythologized as this "humungous, almost infinitely sprawling, kingdom—" representing the entirety of Metro Detroit's "crazy system of connections and mingling worlds of stark affluence and poverty and all the memory that rides the gradient of Woodward from Detroit to Pontiac."

When Milia admits that "writing is all I know how to do to stay sane," I can relate. But those rigors of the road, survived together as a band of brothers (with David Jones, Ryan Etzcom and Zachary Nichols) and the unwieldy weight of Milia's memories heaved from his heart and out onto the page in sometimes painful fits of creation, will soon be rewarded, with a recent singing to UK based Loose Music and a forthcoming European tour.

Curious as I was about his process, I asked Milia to share more upon the songs that became this album, altogether a "cluster of themes" proving to be their "most nostalgic record..." Rife with images of a darkening, or a drifting-away... A loosing of one's grip... "On the borderline of losing my mind..."

Milo: Is there a sense of quelling a kind of panic that you find in lyric writing?

Milia: I wrote the song "Eternity of Dimming" sitting on this bench outside my house in the fall—one of my favorite places to write. The cicadas get so outrageously loud out there at that time of year that it is like a heightening feverish panic. They represent an internal panic of memory passing futilely or present tense squandered—they are the "shrilly insect sound" referred to throughout the album. As I'm actively in the rhythm of writing, though, I'm typically calm or in a sort of glad hypnosis. The panic is totally present but I'm overwhelmed momentarily by my agency of transforming it into language that harnesses it all, like personalized mantras I can chant back to myself in reminder of my instrumental role within this safe world I've created. Every line is a trigger of comfort to me, even if the line is personally tragic to me or evocative of some horrible memory. That I was able to face it and give it lasting breath in the song helps me to own it and make it all my friend. 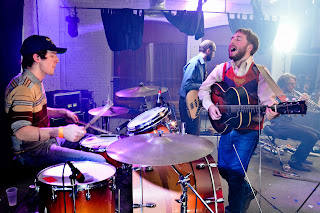 Milo: What are some of the most important things you learned, developing as a musician...in the days spent right after forming this group with Jones in the early 00's out of high school (Country Day, northern Oakland County, 2002). And, then, some of the most formative things you experienced having launched off on a now constant whirl of tours, writings and recordings...

Milia:
The most important thing I learned before "Frontier Ruckus" became the creative entity it is today is basically what necessitated it in the first place: just figuring out my self-identity in this system, what I valued. It gradually became clear to me that I was perhaps a bit more sensitive to the passage of time than most, that it hit me pretty hard. This is admittedly a detriment to most healthy lives but I made a strong shift in my life, around 2005 maybe, not to deny that phobia or tendency or whatever within me, but to embrace it with somewhat of an obsession. For better or worse, it allowed me to create these hyperbolically intense documents of memory that I reside in and others have the luxury of visiting from time to time when they need a subtle dose. I'm glad to provide that and it's made me who I am.

Milo: And, since the band formed and since-flourished, you've learned...?

Milia:
Coffee is the best drug. Spending every waking hour with the same four dudes for several years is an effective way for an only-child to get bros. Singing every night and smoking is hard to pull off. Treating people with respect is crucial and possible to achieve while still maintaining a cool ego and self-image. You can hurt somebody without even trying. Stretching works. Lies add up. The gulf between 22 and 27 cannot be underestimated. Shampoo every other day for better hold. Only enlist the services of people who you are convinced understand and believe in the overall ethos of your work. 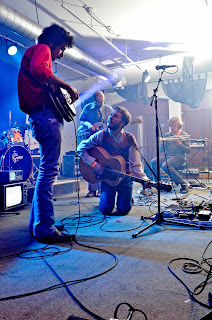 Milo: You were an English Major (Michigan State), so I can't help asking you to assess Frontier Ruckus as though it were a work, a narrative...what themes have you found? What kinds of recurrent symbolism seem to haunt your tours' pages?

Milia:
One thing that's happened a bunch is the huge "break-through" opportunity being dangled in front of us, thrusting us into some existential decision of whether or not to take it, and then it being snatched away anyhow. It's pretty comical at this point. Like, a mainstream well-paying commercial that turned out super lame, or working with a celebrity producer who may have hurt the album had it happened—blessings in disguise when they dissipate. Another recurring theme in our story is comical misbranding or pigeonholing (which I don't think our band is unique in experiencing). There's always the megapopular band about that has a banjo that people lump us in with or attempt to compliment us by telling us we're "way better" than. And nothing against those bands or their success, I just don't hear the similarity in the sound whatsoever—any perceived resemblance is totally cursory to me.

Our songs do not have a  kick drum pounding on every beat with a constant air of epic triumph and danceable ecstasy. We're way sadder than that and I hope more interestingly complex. I think of us as an "album" band, and I like the Frontier Ruckus experience to shift markedly from song to song to form an episodic kind of trajectory through a record, throughout an interconnected catalog, yet always retaining some nebulous common denominator that vaguely defines our identity.

Milo: Another English-major question: you're most formative writing-influences? Be they authors or songwriters?

Milia: Diane Wakoski affected me most immediately as she was my mentor and the writer who taught me how to construct poetry. A lot of my usage of catalog and recurring trope or graphic images comes directly from her influence. I think someone like Whitman taught me not to shy away from grandeur in seemingly crude things—human anatomy, sexual physicality, sweat, the abject. Having attended Catholic school for 13 years, Christian iconography was unavoidable in my psyche and made its presence known, though that's waned a bit lately.

It's safe to say Dylan's left the biggest impression on me. For someone into lots of words and getting away with harshly caustic delivery there's just no one better. Then Young, Simon, Cohen, Mitchell, Sill. Eternity though, for how wordy it is, is actually our record most influenced by a heightened focus on chordal detail.

Milo: What about the prominent influences leading into last year's creation of Dimming...?

Milia:
I got really obsessed with chord changes and pop music trappings—from Big Star to Gin Blossoms. Lots of 90s alternative rock influence in the electric guitar jangles, which in itself evokes the Byrds. Lots of Lowrey and Hammond organ, which is now as much the Wallflowers as it is Blonde on Blonde. Elliott Smith or the Beatles. All these now imaginary decades merge for me as, simply, shit I listened to a lot in a minivan in the 90s on the way to soccer practice. It was such a beautifully mindless absorption.

Read more on Frontier Ruckus in this week's issue of the Metro Times.

The 36th Ann Arbor Folk Festival, a fund-raiser for The Ark, Ann Arbor’s non-profit home for folk, roots, and ethnic music is presented by The Ark with the University of Michigan Center for Campus Involvement. The Festival takes place at Hill Auditorium on Friday, January 25 and Saturday, January 26, 2013 at 6:30 p.m. each night.