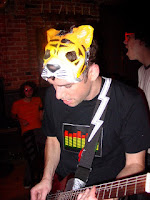 So I've been involved and implicated, supportive and sympathetic, inspired and encouraged  in/to/by  this music scene...for more than a decade...

If my presumably exciting life as some subtle scenester, as a 21st century music journalist, were a movie... then the opening credits sequence would be happening at the nightclub once known as Mephistos, on Florian in Hamtramck. We'd be upstairs, the third floor of this house retrofitted into a dance club...and Carjack would be opening for The Oscillating Fan Club...

That was ten years ago. It was almost nine years ago, now, that Duende played their first show. And, while it's at this point in the blog post that I treacherously tip-toe near the frothy tides of nostalgia, I'd rather remark upon the unique opportunity we have, tonight..., to experience, observe, enjoy... the respective evolutions of these three bands, Carjack, Oscillating Fan Club & Duende. That, or you'll at least be able to feel the resonance of ten years' worth of musical friendship, conveyed in loud, fast, boisterous song form... This concert, just as it was 10 years prior, has Duende drummer Laura (The Boom) Willem's birthday party at the center of it... And, original OFC drummer Robin Veresh has returned to do the graphic design for the show poster.

If you're nearabouts Ferndale, it's Duendseday tonight...& this could just be the show of the month! Los Sueltos will be opening up and it's free admission.