The Mythics were started by singer/percussionist Jessica VanAssche and bassist/guitarist/sound-wizard Chad Stocker in 2009 and almost instantly found this nice niche of dream-pop that was apt for the pre-departure, meditative wind-up toward a night of shenanigans at bars and clubs or the post-ruckus wind-down of calming contemplation and light-dimming descenders.

As the band's progressed, they've kept the instrumentation to be relatively minimal, while assuring the more amorphous vibe, the ambiance, the mood..., to be maximal!


Bassist Jon Berz and keyboardist Tina Louise have joined the band recently, but former members that contributed to the songs on this new album include keyboardist Joshua Doolan and bassist Laura Shortt. The band completed the recordings for these songs at Woodshed Studios in Ferndale. Pictured below is a still from the band's performance of the album's title track, during episode 6 of The Milo Show. 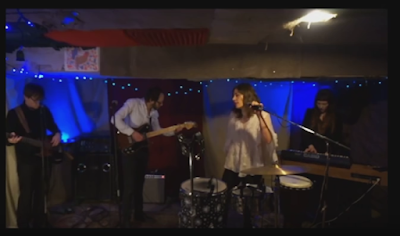 "Love Me Like You" feels like a bittersweet early 60's rock ballad with its striding beats it's steady-climbing/softly-falling vocal melodies throughout its choruses, while that organ augments that charming throwback feel. Then the guitar takes over...! It's a little Fripp-ian with its spacey soaring and cosmic tones, but like every Mythics song, each respective instrumental phrase has such a subtle touch or meticulous manner about it, like it's all serving to sculpt the musical mélange and, frankly, keep things kinda catchy. This isn't a pop band, but like any bewitching dream, you exit each song as though you've just woken up from some refreshing wander on the cerebral plains. Something sweet is stuck in your head!

Should you Google the phrase: "L'Appel Du Vide," you'll find something pretty bleak, but yet the song by the Mythics is an enchanter, a kind of slightly-revved up slow dancer you could almost waltz to, where, we should  mention, VanAssche's exquisite voice, something that can ribbon and swoon from a softened lullaby to a soulful mid-high intonation weaving around the guitars and backing vocals with finespun harmonization.

"Dreams are wishes come true..." My favorite is "Wish..." with the echo-y, reverb wrapped guitars almost pealing as they set that hypnotic riff over ambling rhythms and a theatrical vocal delivery that feels whimsical, like a broadway showtune almost, but vibrant with sincerity. And then....!!

And then, as Stocker and VanAssche always do, they find this interesting (and graceful) swerve, to glide the listener into the bridge. The bridge of most Mythics songs will always feel nearly like it's an entirely different song altogether, only to bring it back to fine familiarity for the final choruses. But with "Wish" the guitars and the synthesized vibes start to merge their ominous/innocent sensations, and the drone settles over like a fog, as though you're not entirely certain, just as any of us are never certain, that this wish, that any wish, could come true... But oh....it all gets soothed by the closer, the title track (streaming below inside the Milo Show episode).

You can watch The Mythics performing at the 2:37 mark of this episode...


You can watch The Mythics interview at the 16:24 mark of THIS episode 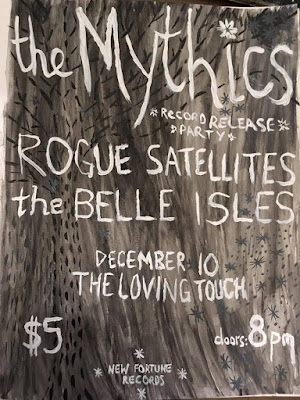 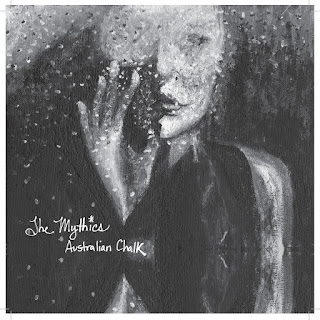