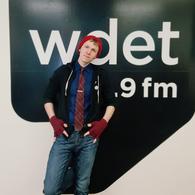 So last November, I was humbled to be invited onto WDET's "Culture Shift" to start contributing weekly segments on Detroit music. Specifically, I had to assess a Top Six List of shows to check out during the upcoming weekend. I'm still thrilled, nearly a year into it, to be continuing "The Milo Minute..." (which, yes, I know, will typically clock-in around about 5 minutes, per segment, but alliteration is catchy so just go with it...)

Each week, I'm able to share four songs by local artists with "Culture Shift's" host, Amanda LeClaire. And after almost 200 songs, I've only repeated an artist on a couple occasions. And that brings a grin to my face.

Week in and week out there is so much creative activity in this city - not even just exhibited through live performances of music, but in so many other ways and mediums, be it dances and symphonies in theaters or visual arts exhibitions in galleries.

My beat is the bar, the venue, the house party... For as many instances of U2-sized bands playing Ford Field-sized arenas, or giant festivals with sufficient marketing power behind them, there are always four or five times as many shows put together by independent artists at spaces that hold 100, 75, 50 or less... I'm trying to talk about those shows. For any listener tuning in to WDET who doesn't know me or my writing.... (and those people probably aren't reading this blog, but still...), it's my M.O. with the Milo Minute to share with them the treasure trove of musical artists that I've been admiring for years, and even those that I, myself, am just discovering as each year rolls on...

While you're here, consider supporting WDET's independent journalism, curation of culture reporting, and unique local programming, as this year's fall fundraiser finds that station in need of more support than ever before.

You can hear the Milo Minute on weekdays from 12-2pm during "Culture Shift." And I can't wait to record the next one!!
Posted by jeff milo at 1:01 PM