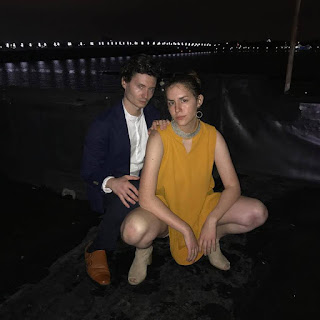 There is so much more that just two humans can manifest, musically...and yet still present as minimal. No, minimal's not the right word, it's just what you're compelled to write after you see two people locking in to a variety of grooves (danceable, funky, spacey, strutting, psychedelic, soulful), but shuffled into tempos that aren't in a hurry, but also aren't stagnant. With Career Club, you could be hearing bass from a synthesizer, an electric guitar that's been looped, vocals that arc across a range of notes that are veiled by just a touch of distorting reverb, walking beats from live kits that know just when to fill in, or you might notice that a video-gamey-new-wavy sample is the perfect ambiance for a wordless vibrato incantation.

Oh, and about those loops. If your ears are filled by the minimal magic that Leah Barnett and Mark Sleeman are conjuring up there on stage, you might not immediately notice that you're being entranced, more than anything, by repetition. Like the pocket watch pendulum swinging, the ambiance is in, as I said, the incantation, the spell is cast by driving it home, and then driving it home again...

Fittingly, I'm writing this right before Groundhog Day--a holiday known for resulting in elevated ennui for a season but for which also is tied to an existential dark comedy about being in a loop. My longwinded point here, if I could circle back around, is that their very name, Career Club, is a dig at the certain business-day choreography that lots of us fall into, the same reply-all, cc'ed, action-item, vision-statement patterns that could be surreal when analyzed at a distance... And so, Barnett and Sleeman are analyzing that choreography..., musically.

But whereas every business quarter concludes with the usual analytics, Career Club are capricious guides through your maze, because if they want to take a sudden left, they'll take it... The door of their sonic office is always open to one client: improvisation....


CC 1 from Career Club on Vimeo.

You came on to my radar at the Hamtramck Music Fest, so about 1 year ago... Can you tell me a bit of the origin story, how this band got started...?
Leah: We met in high school but didn’t start playing music together until  just after our senior year during the summer of 2008. We were geeked about the Line6 DL4 loop pedal and wanted to make our sound seem bigger than just the two of us. Once we introduced a second DL4, our sound as Career Club was born as we were each able to do multiple things at once. Almost every time we’ve worked on some type of musical endeavor, either solo or together, we’ve recorded each of those sessions on our phones – so now we’ve accrued about 10 years’ worth of musical data! It’s incredible to have this bank of recordings to pull material from, and this is how our current live show setup has come to fruition. We’re able to turn to our voice memos and say, “yea, I like this part” or, “let’s shorten this loop” which allows for us to make something old feel new and fresh for our current shows. 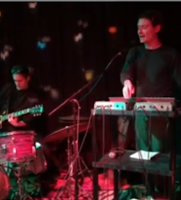 What was your first few shows like? How has your set up and live show changed over the last year or so?
Mark: Our good friend Augusta Morrison of Neue Haus Booking asked us to play a show in March 2018 so we utilized that deadline to curate a lineup of tunes. Our first live show (and each gig since then) has been the same set-up as our basement sessions: we always play side-by-side. This configuration allows us to support each other and embrace our sound as one fluid machine rather than separate cogs spread around a stage. We also like the idea of allowing the audience to watch all of our steps along the way, and both of us being near each other/the crowd is a necessary part of our show. We like being able to see and feel our audience’s reactions and we’re so thankful for everyone who’s been along for the ride with us.

Your the first band I've seen that's brought a media cart up on stage... but it's practical! ...Still, can you talk about the songwriting/song-creation process...?  Are you pre-recording things to trigger later when the song's done live? What's the most challenging (or maybe fun?) aspects of this process?
Mark: Our writing process usually stems from a guitar loop or key melody, maybe even some howling, and then we build on top of that. Leah sits at the drums with her guitar and I stand at the A.V. cart behind the mic and keyboard to start an improv session. This ends up resulting in a track that we can fine tune and perform live. Once we’ve reached a certain momentum on a tune, we’ll generally know if it’s going to make it to the next stage: ...performance level... – and it’s so exciting to try out new things for an audience, even if it’s just a few days old!. Every loop is done live, which is both the most challenging and exciting aspect of Career Club. The whole process is fluid with a structure we attempt to follow each time we hit the stage.

Leah: ...and the AV cart isn’t only just functional but it’s also an integral component in the theme of Career Club – we like the idea of using everyday objects that one might use in school or an office and placing them elsewhere. We’re constantly poking fun at, and playing with the phrase “...don’t take your work home with you” … but what if you go to a dive bar and see an A.V. cart up on stage? How would you feel if you saw an office in the sand one freezing morning on Belle Isle?

If you were asked at a party, on the street, or at a coffeeshop, what kind of music you make or to describe your band...what would you say? Or what have you actually already said in the past?
Leah: We consider ourselves to be pop! It’s really hard to put in a box – we like simple yet complex and catchy layers. We like to reverse and reduce our loops to half tempo for some variety to the hypnotic and repetitious grooves. Our music sounds like when you win at solitaire and all the cards flash across the screen, the delicious eating scenes in Erin Brokovich  and/or Selena, and Burbank California’s dive bar the Blue Room.

I feel compelled to mention bands like River Spirit or Double Winter, in terms of local reference points...in that, just like CC, I can't put it into a box, or one set genre category... Can you talk about any bands, be they local or other contemporaries or from the past that you've drawn influences from, and what it is about what they did that inspired you?
Mark: Double Winter & River Spirit make us weep! We fondly admire Ween, R. Stevie Moore, the B-52s, and Britney Spears to name just a FEW, too. Our obsession with highly produced tracks and the endearing quality of lo-fi home recordings is inter-meshed in how we think about our music and, eventually, how our future recordings will hopefully turn out.

Leah: We hope to have ourselves a little tour, get some recordings onto the world wide web, and crank out some video projects along the way this coming year. Our friendship started with our love for music and to be able to play and create together is something truly out of our wildest dreams… ....oh, we’ve gotta go … our boss is asking us to use the T4 Server for the data files and percentages … all we have is a TI-89 calculator for the projections …
.........................

Career Club
Posted by jeff milo at 6:09 AM