I know I said this blog was done. But if I don't put these words down, then it will seem like this never happened.

And while I haven't covered anything like "musical theatre" before, in any prior post, I won't sweat breaking precedence, as this will, now, assuredly be, this blog's final post. But what kind of theatre did I witness...?

Well, an artist calling himself Trev Tochnik created an interactive performance piece that he called "The Power Of New Money." An actress from New York, Mick James, collaborated with this admittedly esoteric Michigan-based artist, working as the co-director for this minimalist-and-yet-still-complex dramaturgy.

Now, there is conceptual choreography and very specific lighting cues that go along with the actor's mannerisms and movements, but its all set to music. In fact, what's really been brought to life in this strange play are the songs that Trev Tochnik created..., it's just being channeled into a surreal mime-like opera of sorts, rather than a typical trope for "a band," like a night at a "club." I couldn't see if there was a sound engineer or a lighting crew, but I have to imagine there was some bustling around in the dark shadows of the claustrophobic backstage area that was allotted to Tochnik and his troupe, at the Tonsle Estate. 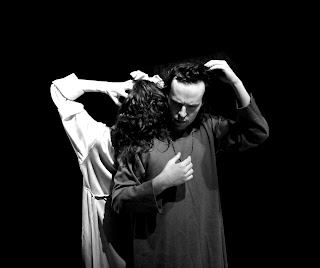 There are a few photos from this performance at the Tonsle Estate woven across this "final" blog post. You can see how I wound up discovering that the "backstage" area and the actual "stage" were transient. We followed Mick and Trev from the kitchen, to the bathroom, to a landing by the stairs, a vestibule, and then back to those bathrooms, a long and narrow space that provided just enough space for this small audience to peer into, and witness the movements. Each elbow bend, or furrowed brow, each awkward stretch or somehow graceful hunch of the back seemed to express a range of emotions that were both pensive and fearful, in love and in dread, relaxed, and yet yearning... Yearning for the ever-restoring power of "new money..."

If you've never been to the Tonsle Estate, it's not really near anything. In fact, its situated between two empty lots. This assured that the rock-tempo drum beat and clanging, fuzzed-out guitars of a song like "You Come Back When You Arrive" would not disturb any "neighbors." But also, the more ambient, swelling whole-notes of the solemn space-gospel "Maples" could attain an idyllic resonance, enveloping the house-bound audience with proper reverberation. The spaciousness of the house, as well as the unique architecture of some of the rooms, meant that the urgency, the alarm, the suddeness of moments in the play that involved loud screaming or gunshots, could attain sufficient emotional impact, without restraint. I'm amazed no one called the cops..., but yet, how could they be frightened when the tranquilly-groovy orchestral-jazz suite "Hawaii" started washing over them....
You could see in Tochnik's eyes that he was both excited, and distracted... Or perhaps that was his character? Perhaps that's at the heart of the album's true emotional import..., that we are all eager, and yet anxious, in this endless (and hot) pursuit, for this "proverbial" "new money." I know that Tochnik is eager for more ears to hear the songs that accompany his play... He told me after the performance that they would be available this Friday (Feb 22nd). 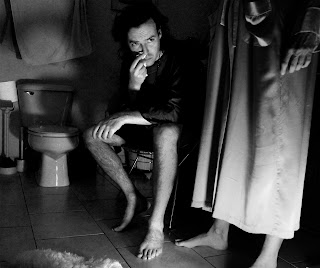 There is something about the softly booming bass, the arcing feedback roar, the sonambulistic swells of "Homelooking," that palpably suggest a kind of elevation, or a detachment..., a striking outward for new territories, a longing for grander things, or at least just more grandness..., a full, heart-swooning  kind of ambient song that fills up any room that tries to contain it. At times, I felt like I was floating within the 10x10 confines of a certain room, as though the soundwaves had attained water-like qualities; the distortion curling after the chorus, the haunting synthesizers shuttering like curtains. I found myself forgetting to take every third breath. There is something about the softness and the ominousness, that makes me believe that Tochnik has a quiet and quaking ambition to use this music to only push his stage show further.

I only regret that I lost my programme from that night. It was seven pages worth about the play, with lyrics, credits, and thank-yous, that also included a diagram of the Tonsle Estate, it's unique layout; sort of a prepper on where we would be moving, with the performers/directors, throughout the night. But I'm still smitten with the music.... The Power of New Money; some kind of ambient-post-rock trip, threaded by croony, vibratto-heavy vocals that would phase in and out of a fuzzed-distortion, and a crisp, lilting lullaby. 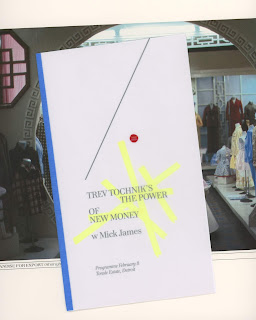 These images you're seeing were captured by photographer Julie James. Tochnik and James forbade any other kind of camera, other than James'.

I won't be surprised if this play is never seen again. Though I know there's intentions to create it elsewhere. The songs will haunt me, sublimely, for a while... And now, you'll get to hear them yourself. I keep returning to the disco-beat and curiously cadenced bass of the title track, "Power of New Money...," where Tochnik sings "...we surrendered..." That's how it felt, as the spell of the songs was cast, and as Trev, the actor, took on each song's evocation, through his eyes, and his stare. At what point, he left me asking myself, do we catch ourselves...., to keep from surrendering? Or are we complicit, and even enjoying the psychic and emotive forfeiture....