Detroit's Mike Anton epitomizes the blue-collar folk hero (but even then, tweaking the typical Dylan-y perception with his own signature, passioned panorama and blunt, quirky poetry); his tunes were/are vibrant, vitriolic, anthemic and cathartic - always slogging it through the day-job so that he could get back to pen-and-pad, guitar-and-harmonica, to chip away at his blues-rock ouvre...
~


"...a combination of shock, anger, fear...all wrapped into overwhelming concern..."

Mike Welby, drummer for Detroit blues rock power trio the Mantons, speaks of the day he found out his long time friend (and Mantons-founder/singer) Mike Anton...was shot in the face. 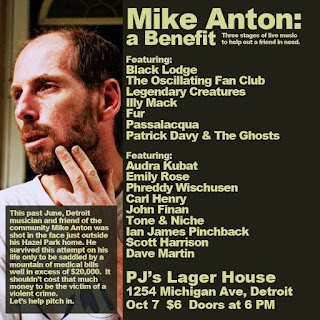 Friend and longtime fan of Anton's work, Kyle McBee, along with Welby, were given scant details from police, the morning they found out:  "...he's alive and he's shot in the face." No other info, not even the name of the hospital.

What followed were eight "horribly anxious" hours, until more information reached them. Walking into Anton's hospital room, seeing him "breathing, conscious, able to communicate" Welby received an extreme relief that was quickly tempered by questions ("why?!?") and then strained by the inevitable medical bills.


"Most musicians in this town don't have insurance," McBee said. "Everyone that was able to do this, everyone that expressed interest in helping or at least was sympathetic to the cause....I mean, the amount of people that wanted to be on the bill............."

".......to see everyone come together," McBee continued, "the amount of help from Matt Luke and Anthony Retka, Mike Welby and PJ, for putting this together, it has just been an honor to Mike (Anton) but it's an affirmation to me, the community of artists that I work with and play with. I'm very proud of them, of everyone..."

Anthony Retka (a.k.a. Tone, of Tone & Niche) agreed: "It speaks volumes." Musicians are, often by nature, blue-collar/DIY types, when it comes to financial status - so when one of our own is hit with five-digit medical bills, it's heartening to see so many pledge their support and commitment. "And all because he had the bad luck," McBee says, audibly irked, "to open up his front door and get shot." (The story was covered by the Metro Times, here).

Others who can't make it, like Loco Gnosis, are offering up merch -to have proceeds go directly towards Anton's relief.

Retka has known Anton for almost ten years, hanging out together after a fateful gig, back in 02, and steadily solidifying a friendship. "His music? That's the candy. That's the sweetness of the deal; he's a great songwriter and can blow the harp with the best of them. I've always enjoyed Mike's point of view and style, when it came to the craft of writing. His tune, "Blackbirds in Detroit" will stop anyone in their tracks..."

Indeed. McBee was stopped in his tracks when he first heard Anton, opening a set with his song, "Blood," on the stage at the Blue Note (in Pontiac, where McBee day-jobbed, years back). "I had to go looking for him," McBee recalls, likening it to Dylan seeking Guthrie, scouring through othre M. Anton's in the Grosse Pointe phone-book.

"I found him at Trixies a year later and he's been a close, close friend ever since. I've seen him start his first rock band and it's just great to see this guy continuing on, now, even after all this...he's survived, and still translating this into new music. That...is the mark of an artist at his craft, to translate your reality into something that everyone can have..." 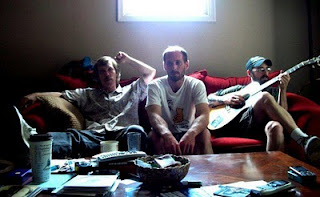 "For anyone who believes in any kind of cosmic or karmic justice, it's gotta be hard to wrap your head around what happened to Mike Anton..." said Matt Luke, who, with Welby, Retka and McBee helped throw together this week's benefit, and, who also will be performing as part of the special (and, as it stands, one-time-only?) Black Lodge reunion (along with McBee).

Other Anton-thoughts expressed by Luke: "...one of the most nicest...most genuine...least pretentious people to ever pick up a guitar"

Welby captured the sentiment of this concert, reaching out with a letter to the music community to not only support Anton in his recovery (physically, emotionally, financially) but also "to join as one to Stop the Madness; the victory must be peace..."

This concert is a chance, Welby sees, "for camaraderie, personal affection and general humanness to triumph, if but for a moment and but with only a few dollars raised...."


"But, maybe it starts a message within each and every attendee and person who becomes aware of its existence that the entirety of this tragedy is unacceptable."


~
In music news: Yes, this is a reunion for Black Lodge, a garage/soul/punk outfit that had such a bright future and plenty of local buzz through the Spring of 2010 only to fade before it's time... but the boys (Luke, McBee and Steve Gamburd and Nick Marshall) are back together this week, for Anton's sake.


When band's work (just like romantic relationships), then... "it's beautiful," Luke said. "But unfortunately with Black Lodge we just didn't handle it well during the end of our run." Still, "...playing with those guys was like stepping onto another plane and I'm really glad we get to do it one more time, still very proud of what we accomplished as a band" (which includes a full length LP, Moon)...

"When we formed, not one of us had any 'in' with the Detroit music community and every bit of recognition we got we earned honestly by busting our asses... So, one more time then..."

McBee said that they surpassed any initial awkwardness and "flipped right back into gear, back into that groove; a little more rugged around the edges, but still good. And good to see these guys again."

Bands are like marriages...it's rare to see the marriage reconcile... Thus, McBee stresses there's no future plans - if so, then there'd be need for some actual marriage-councilling...


Retka, meanwhile, is looking forward to the release of Tone & Niche's 5th album (not counting singles and EPs)- Everything Is Good will be celebrated with a release show on October 28 at the Berkley Front (costumes encouraged). wsg/ LIVY, Mod Orange, and The Blueflowers!

"The Mantons are again, afoot!" (Having played their first show about a month ago). Stay tuned at MantonMusic.
Posted by jeff milo at 1:58 PM