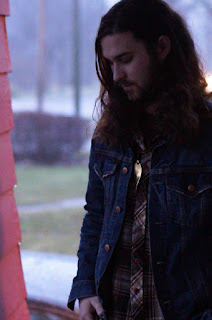 Cameron Jones has had his ears open. Coming of age around the Detroit music scene, the singer/songwriter has been stageside to several iconic songwriters and rock groups. He may only be 24, but it's not like he fell in love with a classic pop/rock sound just yesterday... Since before the Michigan music maker could drive a car, he's been quietly honing his craft, finding his voice, attuning his ear and sharpening his sensibilities. He could have jumped out there on stages as an 18 year old and thrown whatever raw guitar renderings he'd wrought from his initial heart-on-the-sleeve poetry, but instead he kept those solo songs set aside...opting to take-in the local music scene by-way-of other projects (like the indie-rock outfit The Jet Rodriguez).

Now, having established a sonic footprint around Detroit, he's opening up the notebook and plugging in his guitar... A solo record drops this Friday.

Around a time when singers like Tobias Jesso is bringing back the sentiment, when Matthew E. White is bringing back the classic rock 'n' roll sound to pop music and when others like Natalie Prass are pouring lots of soul and softer edges onto the ballad-format, you'll now find Cameron Jones following in that same vein, reviving the sophisticated energies of the classic American songcrafter's sanctification of melody and molder of moods... Pour in some swooning multi-track harmonies, Elliot Smithian bittersweet-tenderness and some Beatlesy-crescendos. ....Have we done enough name-dropping, yet? Maybe you should just listen for yourself.

Jones will be bringing his solo material to stages around Michigan and further out, with an autumn tour on the way. Stay tuned for dates and find more music HERE.