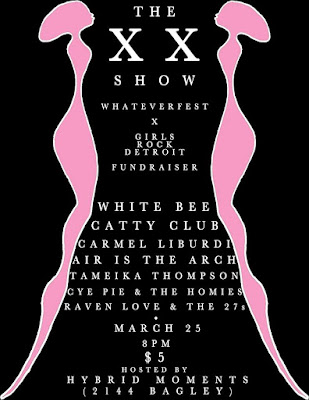 Whateverfest # 6 is coming up soon (May 6 - May 8), with 60+ local bands spread across three outdoor stages. The volunteer committee of organizers are finalizing the plans and details, but, in the meantime, thought it'd be fitting to throw a dual-fundraising event, not only to boost their upcoming festival, but to honor Women's History Month by benefiting Girls Rock Detroit.

You can keep up with Whateverfest over Facebook (and even find the event info here).

Meanwhile, I reached out to Shannon Maureen Barnes, lead singer and guitarist from White Bee, to see what's new and ask about her role with Girls Rock Detroit.

"Anything involving teaching children or adolescents in general, be it boys or girls," Barnes said, "is a positive way to connect and probably the most important thing anyone could do. A lot of teens and pre-teens have negativity constantly pushed on them by people in their same age-groups." Barnes volunteered to help instruct and engage aspiring musicians at Girls Rock Detroit's 2015 Summer Camp, and is currently volunteering to help plan future educational activities.

Girls Rock Detroit's main goal is to provide encouragement to young girls eager to try music. In a world where pop music pulls the spotlight predominantly toward overly energized personalities with unrealistically super-model-esque looks, Girls Rock Detroit reminds the young gifted girls of this area that you can don't have to be the center stage attraction, you can, instead, develop your craft at each instrument, you can be, first and foremost, a musician....a drummer, a bassist...even a sound-tech, if you like...

Creative expression and positive self-esteem; that's what it's all about. And Barnes, along with several other songwriters like Willa Rae Adamo and Melissa Coppola, volunteer at GRD summer camps to not only help instruct aspiring players, but to, if called upon, impart knowledge and insight from their own experiences of running their very own bands amid Detroit's music scene.

"Music helps with motor and cognitive development, also," said Barnes. "Music essentially can bridge a communication gap in a positive way and erase negativity. And, I've noticed that this program is bringing girls from the city and girls from the suburbs together! I really believe that all sheds a positive light on the future for the community in general."

At the concert this Friday, for Whateverfest/GRD, Barnes will be performing an acoustic solo set, much more stripped down than typical White Bee sets. Nevertheless, here's a sample....

Barnes has been longing for a bit more free time, lately, so that she and Michael O'Brien, Anthony Scanell and Alex Niemi can get back to recording. "All of us are very busy, but hopefully this summer we can make something happen."

While you're here, I have two more recommendations...

The raw vibrancy of Catty Club


And the sublime folk-rock of Air Is The Arche


Stay tuned for more on Whateverfest 6