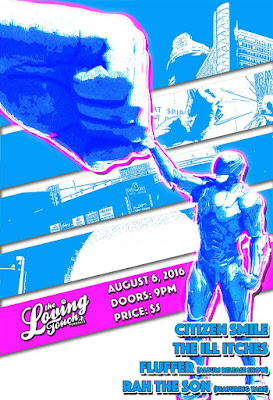 I could choose any time to get nostalgic, I suppose… This mid/late summer’s evening of sounds and dancing is as good a’ time as any… I, like you, have probably been watching groups like Citizen Smile and the Ill Itches grow up on stages over the last 6 years. Older usually means wiser, but with this pair of bands it also means sharper, bolder, and more adept to experimentation.

Whereas Citizen Smile got pegged for their power-pop early on, they’ve been venturing into realms of space-folk and baroque-rock in the last year or so. And while the Ill Itches are as loud as they’ve ever been, they’ve widened their gaze from garage-splatter to something more like psychedelic blues and a bit more of an atmospheric hard-rock tumble.

Citizen Smile are working on a follow up to 2013’s Everything’s Changing and Nothing; look for it next March/April 2017.

Then there’s Fluffer. I’ve seen this outfit’s name on a couple of showbills in Detroit over the last year, when they’ve toured up from their current homebase of Cincinnati. They could be not-too-distant-cousins of Jamaican Queens, as they similarly imbue a bit of Trap bluster and harsh-yet-exuberant electronica onto their beat-driven churnings. The operative word for this trio is “maximal…,” a rattled-up dance-rock set on instigating movement, be it rhythmic and graceful, or simply tremulous in nature. A commenter on the band’s soundcloud declared of one song: “…this fucked me up…”

Sunny Detroit: the Story of + & * was released online recently, and it features contributions from Tart as well as Fluffer. Rah The Son will have some guest contributors coming up for cameos during his set, so that means that Tart is effectively on this lineup as well.