Frontier Ruckus at El Club: A Chat with Zach and David

Last time I checked in with Frontier Ruckus, singer/guitarist Matthew Milia was eager to talk about the band’s “new” album, Enter the Kingdom. That was a year ago, but we’re still waiting…That doesn’t mean the band hasn’t been busier than ever. The quartet, with Anna Burch on bass/vocals, along with Ypsi-natives David W. Jones on banjo and Zach Nichols on singing-saw/horns/melodica & various electronics, have been touring fairly consistently over the past seven months, including an intimate Living Room Tour throughout the summer months. 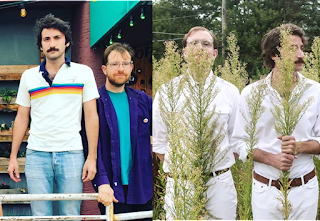 Meanwhile, Jones and Nichols talked to the me about the live incarnation of their newest songs (via Enter The Kingdom). “I think we’ve successfully performed six out of the 11 songs (from Kingdom),” says Nichols, who, by the way, has been busy with another project that he started back in 2014 called Shuttershop (which features Jones). “(Frontier Ruckus) has actually never played all the way through, songwise, for any of our album’s releases…, but I’d be happy to do it for this one. But that would require four string players and another trumpet player, to be done right…”

Turns out the wait is almost over, Fruckus-fans…  The band announced, earlier this week, that Enter The Kingdom will be out by February 2017, via Loose Music. Now, you can stream a new single, “27 Dollars” here, or you can stay on this page and watch a live version of that same song, from one of their recent living room concerts….

But the real reason we’re here is not to count the days until Enter The Kingdom’s February release… And it’s not to pressure you into road-tripping over to Wayne County to catch the band at their show, Saturday in Detroit (at El Club). (You should though…)

The real reason we’re here, online, today, is to pick the brains of Jones and Nichols, two Ypsi music mavens who have been in this band for ten years, five albums, dozens of tours and who-knows-how-many shows… (Also, they have a 90% attendance rate at Mittenfest, so far). (ALSO, Jones actually co-founded what became Frontier Ruckus back around 2002, ...but we digress…)

Let’s talk about being in a band like Frontier Ruckus.

“It can be intense in the way that (the four of us) are completely smashed into each other’s lives for months-at-a-time, in some of the smallest quarters possible,” said Jones, who works a professional music teacher (specialized curriculum: banjo) when he’s back home from Fruckus-life. “I think we would lose our minds if we weren’t also such damn good friends. I think the moments we’re always remembering, and cherishing, are the most impossibly spontaneous and random ones; think along the lines of crashing with the sweetly drunken hippie dude that wanders into your spur-of-the-moment back-alley dance party… Imagine that: you’re in Wyoming, and you have nowhere else to say and he basically saves your lives…”

“Yeah, it can be intense,” says Nichols, who, in his time off, has started dipping his toes, recently, into producing potential stories for radio. When I ask him if it’s unavoidably ‘intense,’ this idea of a band being a Voltron-like entity of individuals coming together as one…, he says: “Not as intense as Voltron. But, as with Voltron, Power Rangers, or Friends…after so many tours, we’ve become exaggerated versions of our characters in the ensemble cast.” That’s true, it’s been a few seasons in this Sitcom life, hasn’t it….? “Everyone has a role to play, and expectations to fulfill, which can make it easier on us as we work together, but that’s as long as we remember that we’re human and not characters from a television show.”


Let’s talk about Enter The Kingdom. Their fifth album was recorded in Nashville, in the early summer of 2015, produced with Ken Coomer (Wilco’s founding drummer). This was a first; Frontier Ruckus have never recorded an album outside of Michigan, nor had they ever enlisted anyone outside the band for production collaboration.

“I think (Coomer) would agree,” Nichols says, “that the biggest contribution he added to the record was in the drum department, because he played all of them for this record.” When the band is on the road, they’ve previously enlisted the help of Ryan Clancey (of Stef Chura’s band) to play drums. “On paper, (Enter The Kingdom) should be the most different sounding Frontier Ruckus record, because of the new studio; a new producer; a new drummer, a new bass player, a new engineer; and a string section, but it doesn’t sound too far off from our previous records. My favorite track is ‘Gauche,’ which may tarry somewhat from our norm by including some jazzier chords.”

Coomer’s drumming days with Jeff Tweedy (of Wilco) go back to Uncle Tupelo. He has also worked on production for/with Emmylou Harris, Steve Earle, Jars of Clay and more. Frontier Ruckus, meanwhile, began as a minimalist gothic-Americana outfit, heavy on that banjo and lots of poetic atmosphere, but they’ve blurred the boundaries and entered realms of modern indie-pop, spacey psychedelic folk and some straight-up 90’s college-rock riff-outs. It’ll be interesting to hear where they go with Kingdom…

“It was definitely very different in its level of efficiency and professionalism,” Jones says, looking back on Kingdom. “We cranked out 10 songs in 8 days, I think... That was such a relief for me personally because in the past we've always spread the record-making process out over months and months and it almost feels excruciating. We were a bit apprehensive, to say the least, of working with a producer who might try to exert some crazy creative control over things, but those fears turned out to be unfounded. (Coomer) was on the same page as us almost always, and whatever ideas he did bring to the table we loved. And hell, the dude played drums on my favorite Wilco records. To have that feel on this one is incredible!”

The band is heading back to Nashville at the end of the month for AmericanaFest. Meanwhile, this summer saw them charming exclusively-sized domestic spaces, living rooms, backyards or basements, for one of their signature quirky/cool tours. “They're really some of our favorite shows,” Jones said, “as it just takes all of the bullshit out of the equation. Not that we don't love playing loud club shows to big audiences, but there's obviously something special about just playing your damn instruments in a damn room where people are sitting on the damn floor. Damn, it's fun…”

“There’s something special about the most direct route of the instruments to the audience’s ears,” said Nichols. “In a full-on electric show there are so many layers of separation between the musicians and the audience. I like seeing shows in an acoustic setting and even more I like performing that way.”

But going back to Kingdom’s delay… And, “delay” isn’t the right word. It’s just that it’s difficult to be in a band these days when it comes to figuring out how to distribute your music. Because that question mark of “who…” looms so large on that day you get out of the studio… “Who’sgonna put this out?” The answer finally came: Loose Music.

“I mean…, to say it's frustrating to try and make it work these days would be quite the understatement,” said Jones, concerning the state of the music business and trying to wade into it…

“A lot of labels are functioning at a level where they’re not signing mid-level or somewhat established artists, but going for several brand new or buzzy bands, hoping one or two hits. We're all scraping by and happy with our lives and the choices we've made. But…, some of our songs have been played or streamed or watched or listened to millions of times and we’ll get the occasional check for like $57…for the whole band.”

“Either way,” Jones says, “we're damn lucky to play music for a living, to have experiences with each other, to travel the world multiple times over. Fans have told us time and time again how what we do makes their lives better, that's all we need in the end…”

“Honestly,” Nichols said, “being on tour with your friends, recording music, and playing late night Hasbro’s Catchphrase in Washington D.C., for example, are rewards unto themselves!”