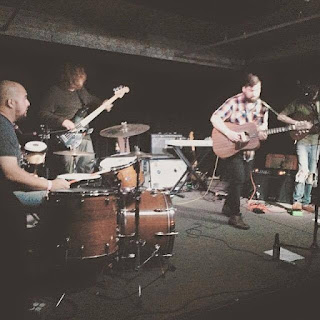 We've featured Mountain Babies here, before. But now the Port Huron based quartet have sent us their brand new music video to premier for you, and it is delightfully disorienting...! It's silly surrealism, and yet, almost majestic...? And set to the most sublime and psychedelic Americana folk twangs, coiling riffs and crisp, resplendent tones.


There are moments of weird, noodly bends, riffy rock, Beach Boysian harmonies and chamber-pop charm. It sounds as grand as Grizzly Bear and its certainly a distant-fellow-Michigan-cousin of the subdued-dazzles of Breathe Owl Breathe, but there's a signature whimsicality to the sound where Mountain Babies make it all their own. Told in what feels like three or four separate movements, filled out with banjo, clarinet, and brushy jazz drums (at points), and this dreamy amount of delicate reverb drizzled over the vocals, the end result is this.........


Mountain Babies features Dave Peters, Brandon Leyva, Stefan Nisbett, and Ethan Williamson. Their film, which I have to say, shows a fine sensibility for  the utilization of natural light, is directed by Gage O'Barsky.

But things get weird... 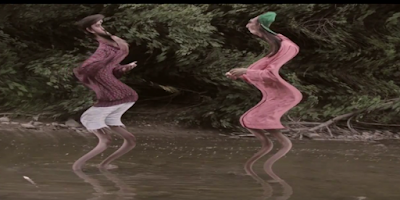 "The googley eye trip, along with everything else, just happened so fast," says Peters. "We went to a thrift store on our way up and started grabbing all kinds of outfits and just went with it.

I think too much of our Americana/folk and baroque-inclined acoustic outfits had just gotten too stark in the mid to late 2000's. Mountain Babies are a breath of fresh air, in that regard, keeping the music sounding artful, with a hint of mischief. "Just went with it...," as Peters says about the video, sums it up nicely.

The storyline, loosely, is Peters and Nisbett are going on a spirtual journey together. "We head out to see mother nature and Stefan pulls googley eyes out of his pockets and we take them as though their hits of... something..." and bizarre-ness ensues.

Pointe Aux Barques/ Dead Man's Walkin' by Mountain Babies. Filmed by Gage O'Barsky. Thanks for tuning in to watch it.