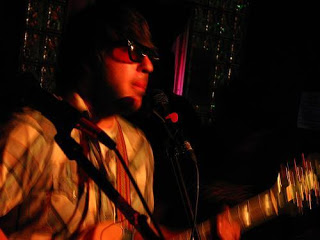 I'm not sure where to start with this one... Not everyone who reads this blog is going to know who Rabeah Lteif was, but I just got back from a memorial service for the Detroit based guitarist/singer, and it showed me how much of an impact he had, not only just on the lives of his family and friends, but upon the community of artists who embraced him as an intrepid and vital member of the Michigan music scene.

I didn't get a chance to stand up and speak at the memorial, but I'll share some thoughts here... Rabeah started out in the mid 2000's with a swaggering/crunchy, psyche-groove high-energy rock outfit called Charlie Don't Surf. I wrote a review of the band and used a phrase to describe the sound of his voice and the effects he applied to its amplification, and it led to him changing the band's name to The Electric Lions...and soon after, Electric Lion Soundwave Experiment. Rabeah would go on to collaborate with several artists and perform several shows to local audiences across Detroit, Ferndale, Dearborn and beyond.

Rabeah taught me not so much to be positive, but to manifest positivity, give positivity, nurture positivity. He was the great encourager, he'd rally fellow bands in such a way, grasp their shoulder before they'd go on stage or say something with that big curled smile of his, and it'd not only make you want to do your best, but feel like your best was now easily attainable merely because of his presence in your audience.

Biggest of all..., he never talked about his own music with me. I regret this, but was also always astonished, in this refreshing way, by such a.... not so much self-deprecation...., but a shifting of perspective. Nothing was about him, when we talked. I say this with love and no ill-will, but you can imagine that I talk to a lot of musicians and they are typically eager to share some of the excitement they're feeling over a project they just completed. I always expect that. With Rabeah, we spoke about everything but music...., and yet his music was such a vibrant part, such a prevailing part, of his essence. Music meant so much to him, and his music meant so much to me... But what it came down to, when we'd talk, was how much our friendship meant to each other. That focus was never lost... The focus was always: each other's company.

Rabeah was, as I knew him, admittedly self-effacing to an extent. He was passionate about his music and his bandmates and his recordings, but every time I would interview him for an article, we'd get to the end and he'd say, with a self-dismissing pursing of his lips and lowered eyes: "...nah, you don't even have to print any of this if you don't want..., we can just talk..." I don't expect every band or musician I meet to be as kind and selfless as this guy, but I'm so glad I got to know him as well as I did... He was a true friend to me. And anytime I felt any minute hint of jadedness sneaking in, he would always restore my soul's silo with souped up enthusiasm, for music, for creative pursuits...and for friendship.

Ten years ago, a handful of outsider bands, from psych, to garage, to shoegaze, to punk, gathered in the old Bohemian National Home on Tillman St., to perform for the Fiberglass Freakout Festival. I didn't realize until this memorial, how many lasting friendships I, all of us, made in that one night. We all came back together on this sunny and sad afternoon, to pay tribute for the sparkplug who was a central figure to the inspirational fervor on that evening, 10 years prior... Rabeah. He made a lasting impression. We're all still creating, cuz we're all still inspired... And he was crucial to keeping our individual fires stoked.