No More Cover Charge at The New Way Bar 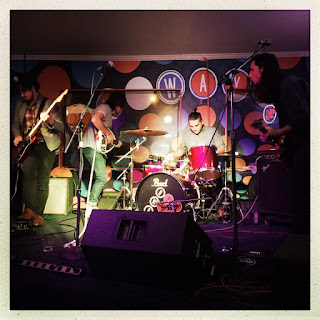 On Friday, January 26, The New Way Bar's owner Jamie D'Angelo announced that there would be no more cover charges to see live music. Weeknights, weekends, any day, any show, free entry.

I just got off the phone with Jamie, and I'll be putting together a proper feature for the print pages of The Ferndale Friends soon, but I want to spoil something right away and tell you that the impetus to "make this leap," he said, came from a genuine belief that this bar is, and should always be, the "host" for local talent.

Without performing bands, Jamie said he wouldn't have been able to sustain his current run of the New Way Bar.


In fact, we're coming up on five years Jamie took over the New Way Bar. Over his first couple years, it became a more and more active spot on the scene for shows. And the idea to go all-free/all-the-time for their scheduled concerts has been gestating in the back of his head for quite a while, now.

It ties in to something I've been considering more and more these past five years - the risk of music and musicians being underappreciated and even devalued. I say "risk of," but I know that in the estimation of lots of artists, it's already happened... ...that music has become white noise in the background of a bar or a club or a gym, or something you trim into the intro's and outro's of podcasts or splash upon car commercials. We're at a moment in time where people expect music to just be accessible, and then just as easily passed-on.

That's why I'm encouraged after seeing Jamie make this move with the New Way Bar. Because, frankly, he had gotten tired of seeing folks come up to the door, see a required cover charge, and then turn away... Of course the hardcore music lovers in the scene will always come out, but it remains difficult to attract the casual club hopping individual who's just exploring the happening spots of a downtown on a given weekend night. If the New Way's door is always open, especially during all local music concerts, than a wider range of audience members can become acquainted with the myriad and diverse bands populating the greater SE Michigan arts community.

Experiencing music in a live incarnation is vital to a comprehensive appreciation of it. It's when you hear it, when you see its creators, live, right there, in the moment, propelled, that it grows from being just you appreciating music, and becomes you celebrating music. More than that, you're celebrating it as a group; you could be surrounded by perfect strangers, or your best friends, but the ceremony is still a shared experience. And that's what makes it memorable.

Don't miss out on making a lasting memory by being exposed to some amplified music from a stage, made by songwriters and bands that may very likely be your neighbor! The next time you visit The New Way Bar to hear some live music, the only thing you'll need to take out of your wallet is your driver's license. 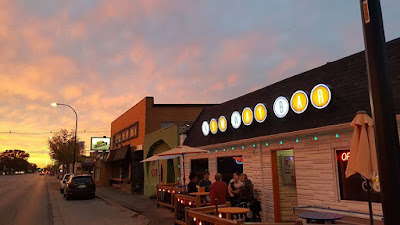 The New Way regularly hosts evens like an Open Mic Night (featuring Ryan Dillaha), and a stand-up comedy night. Follow on Facebook for information on upcoming shows.
Posted by jeff milo at 12:21 PM