Emily Barr, Austin McCauley and Brodie Glaza were friends first. They're in a band now, writing and performing songs together, but something special always emerges when the foundation of a composition come back to a friendship. That band is Kimball, and this week they're releasing their debut EP, North Wilson, capped off with a concert at the Loving Touch (INFO). The Doozers, Remnose, and Who Boy will also perform, along with the unveiling of Kimball's debut 7-inch on colored vinyl via Jett Plastic Recordings.

Kimball create an indie-rock that's accentuates melody, balance, and propulsion. The drums build, elevate, soar, the chord progressions and cresting basslines feel like a summer wind at your back, and there's a sense for the cinematic when they go from a calm, pared back valley, to a skyhigh peak where each intonation, be it the honeyed lead vocals, the intertwining acoustic and electric guitars, or even the clasp of cymbals, each get space to blossom and then blend.

And its fitting that this batch of songs evokes a sense of rising.... since that's essentially what instigated the band: a rising to an occasion, of sorts. They actually formed Kimball, officially, after a debut performance at Arts Beats & Eats in 2016. But to get back to the beginning, first: McCauley knew that Barr was a singer and a couple years after they became friends finally made the suggestion that they start writing and recording music together. You can hear a finalized version of their first song, "Guns," streaming above... Glaza brought a live drumming element to replace the sequenced midi beats they'd initially demoed. McCauley said that it gelled, even though they each had distinctive musical tastes and brought unique approaches to the table.

McCauley asked why not? Because another friend from school had asked him to record a few demos for another band to potentially submit to Arts Beats & Eats but it fell through. So why not try recording a live video of "Guns" with Barr and Glaza and submit that? It worked! "I remember getting the call that we got on the line up," said McCauley. "...I freaked out with happiness in public." Soon after that performance, they added bassist Christian Fifelski and Jacob King on electric guitar.

"A lot of our songs sound and style have been inspired by what we were listening to at the time," McCauley said. "So with 'Guns', (Barr) was listening to a lot of the Neighborhood at the time... For the song 'Wildflower,' I was listening to bands like Hippo Campus and Real Estate. Sometimes I look at our changing sound as a positive and negative. There's maturity and comfort in keeping one solid sound and sticking with it, but at the same time that can get stagnant for the artist. We try to create a balance between allowing our creative inspirations influence us, and keeping a constant between the different styles."

McCauley said that they prefer to show the emotion, a suggestion, or an intonation, or a bit of wordplay to unpack, rather than lay something out too bluntly. "I thnk that's where a lot of that texture comes from," Glaza said. "(It's) trying to communicate that emotion in our music..."

The key, then, is channeling that emotion and this energetic playing style to the stage. But another tricky element will be finding a way to properly capture it on a recording... Something I've learned working through this EP," McCauley said, "...is that a lot of the finished product was because of other people. Yes we wrote the songs and played the instruments, but the EP sounds the way it does mostly because of our engineer/producer."

North Wilson was recorded at Aashrum Studio by Steve Saputo. But McCauley has been writing and recording music for most of his life, starting out on piano; 'Wildlower' was actaully recorded in his basement. Glaza said he also had an overwhelming passion for music, but it really didn't kick in until middle school, when he "fell head over heels in love" with the drums.

They cherished their time in Aashrum Studio, up in the woods of Ortonville, last summer, where they recorded the EP. McCauley says that recording the EP, just like their submission to AB&E, was "somewhat of an impulsive decision." An opportunity to be picked up by a label came around and they decided if the demos they sent in didn't get them picked up that they'd go ahead and record an EP at a studio. "We didn't necessarily write these songs to fit perfectly together, but as we started recording them and hearing them all in the context of an EP, we noticed a common topic of struggle within our home lives..."

Kimball's keen on rising to occasions, clearly. It's all about forward momentum. Having since sutured themselves into the local music scene, they're eager to continue building after this EP, honing the live performance, playing as many shows as possible, linking up with new bands, getting out of town. "Since this EP was recorded about a year ago," said McCauley, "we've already been dreaming up ideas for an album, planning out singles releases, and really focusing in on the technical aspects of our music--live, and in the studio." 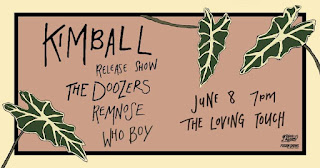 Find the band on Spotify
Posted by jeff milo at 4:54 AM