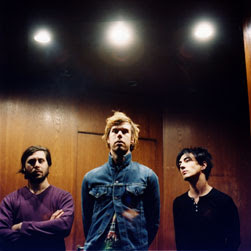 Angus Andrew tells me how quickly one becomes acclimated to a jail cell. He and his band, Liars, revered by art rock lovers of any nuance, be it for their shock-n-dread dynamics, their torrential rhythm assemblages or their haunted-head-harmonies, spent a day in late May performing live songs in a penitentiary, each of them, guitars, amps, drums or microphone, behind bars in their own box. (view it here via Pitchfork TV)

“You do immediately get a shot of some sort of visceral kind of impulse from your surroundings,” the tall lanky Australian admits, as can be viewed online in full wall-bouncing explosiveness. “And, yeah, I felt very connected to that space. The idea of being kind of locked up, especially in that kind of prison is a really interesting kind of physical embodiment of some of the ideas that I think we play with, with the music that we make.”

The latest batch of music made by Liars is this spring’s Sisterworld, an almost-concept album inspired by some dark elements of society particularly on display in Angus’ neighborhood in Los Angeles – blunt and bellicosely tongue-in-cheek haranguing of ugly displays, some of them intrinsic to L.A., others perhaps indicative of many streets throughout any metropolis. The trio (with Aaron Hemphill, Julian Gross) met at art school in that city, formed soon after at the millennium but soon transported to New York where they fell into the brief media craze of the early decades’ spate of no-wave inspired dance-punk revivalism. They survived, evolved and elevated to noise-rock aristocracy, endeared to many by their austere and beautiful compositions of fright and freak framed rock storms balancing falsetto whisper howls with phlegm fired battle screams.

They resettled around L.A. after 07’s guitar-fuzz dominant self-titled album and would wind up recording this latest album in about a dozen different locations around the world. It’s songs are not all L.A. murk and melodrama; less an indictment and more a lifting of rose-colored lenses. L.A., after all, has always felt like a home for the band.

“There’s a lot of things that are good about L.A. that are also not that well understood,” Andrew said. “That’s part of the allure for me, for L.A., is this idea that it’s not very well understood and that there are things about it that you can still discover that are surprising. One thing is the notion that L.A. is about having a car and driving a lot and dealing with the freeways and stuff. I enjoy this sort of enclave that you can find here where you don’t really need to live or drive across the whole city.”

“Personally, I think I go in and out of phases of being interested and then disgusted by American culture. Sometimes I’d feel like I really want to engage with it and then sometimes I feel like I need to get on the other side of the world from it.” As he did, in fact, spending the mid-to-late 00’s in Berlin. “At the moment, I’m into it.”

The perennial descriptor stuck upon Liars is their propensity for swerving off into different styles from album to album, throwing off any attempt to label them as dance-punk, no-wave, rhythm-heavy drone, shoegaze, noise-rock, whatever it may be, it never sticks for long, through their 5 major albums. But sensory words like dread, anxious, or spooky (they did have a Witch-themed album) always come up.

“Over time,” Andrew said, “it’s become maybe clearer to people that even though stylistically some of our records have been quite different, that, actually there is this vein that runs through everything and I think particularly when you see us play live, nowadays, where we’re able to play songs from each of the records, it feels like that there isn’t actually that drastic of a change between records.”

Why the spook, why the dread, why the alarm. “Why they’re there, I don’t know,” Andrew said. “I think that’s something that we tried to tackle with Sisterworld; this idea of being displaced or in some sense out of touch with the middle-you or whatever. A sense of detachment and sort of fear or paranoia that comes with that and how do people deal with that? I think that’s sort of stuff that was being written about but maybe in Sisterworld we tried to explore some sort of answer to…”

Whether any sort of comfort can be found in a jail cell, Andrew admits that the band are more than comfortable, particularly lulled a bit into a state of confidence to experiment, in the sometimes fantastically perceived world of Los Angeles. It is the point of their genesis and now, ten years later, returned to and somewhat documented on their latest album.

“It really felt like, in a lot of ways, even though it’s not my home, it was in a sense a coming-home record,” Andrew admitted. “And, in a way something that we felt like we kind of earned after having been traveling a lot over the last few years and trying out a lot of different things and places to live. It was a chance for us to really regroup and for the first time take the amount of time we wanted to on making it, which was completely new because we were always in a rush on all the records that we made. Finally we’d earned the right to take advantage, maybe, of what we’ve achieved and utilize it in order to make the record we wanted to make.”