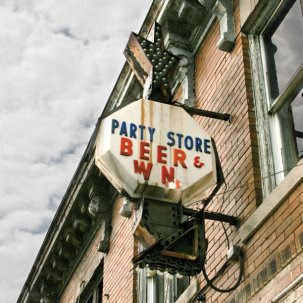 The Dirtbombs echo the successful formula of their 2001's Ultraglide in Black - but instead of covering a stalwart collection of 60's and 70's soul ballads, this February will see Detroit's renowned garage-rock aristocrats reinterpreting the realm of robots.

Party Store is a bit of an homage to the seminal Detroit techno artists of the 80's and 90's that main Dirtbomber Mick Collins was ingesting as they were debuting, from crate dives for '45's on weekends between Gories shows.

Lead single, "Sharevari," can be viewed below. Their interpretation of this A Number of Names' track gives a good indication of the record's allure; with live players interpretting the sequenced beats and loops of computers, it elucidates an Oblique Strategies approach: "Humanize something that is without error." This track sounds like it could be a lost gem from that post-disco era, -dark, edgy, guttural and mystically funky-, but given the muscle and growl of those guitars, it could almost fit in along side some Liquid Liquid jam, maybe ESG or some weirder krautrock trip.

Other highlights for experiencing the Dirtbombs' treatments: Kevin Saunderson's "Good Life" (originally as Inner City) ; + a 21-minute odyssey reinterpretting Carl Craig's (as Innerzone Orchestra) Bassbin with Craig himself handling the modular synthesizers for the album + cuts from Cybotron and Derrick May.

Party Store is out on Feb 1st, via In The Red.
More info