Carmel Liburdi is a natural. 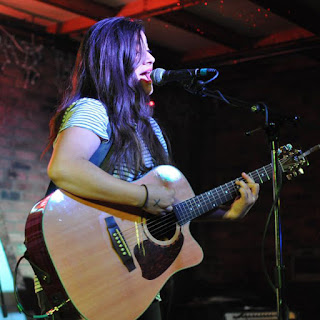 And, she's a natural for a lot of reasons. The Detroit-area singer/songwriter's got a potent concentration of charisma and a sense for theatricality, wary to balance melodrama with mirth, woe with wit, politics with pop.

Her sound is that of a folk omnivore, or even a folk-reinventionist, and her lyrics may contain a few barbs but they're softened by her dulcet, down-to-earth voice. Shining brightest about her is this quietly cool confidence, and I don't mean swagger; I mean more so a comfort, a comfort in a spotlight, or a relaxed state of being when reeling off confessional or confrontational or consoling lyrics, however frank she needs to be, however funny she needs to be, she can handle it. She's a natural--and this interview points out why she's a natural.

Let's talk about influences... I'm particularly interested in finding out how you came to appreciate the vitality of engaging an audience, be it in person on a stage, or through words of lyrics on recordings.

I love blues, jazz, pop-rock, punk...folk...especially folk music from other countries...rag time, doo-wop, hip-hop. The list is extensive. I draw a great deal of inspiration, though, from my life and the people in it, which is where I believe a lot of my candidness on stage comes from. I just sort of get up there and do what comes naturally. I find people, in general, fascinating...and I love sharing the human experience with them. I like to create a conversation with t he audience; to share my feelings and experiences in a personal way, but also relate it back to them and lift them up a bit. The stage is one of the greatest platforms for communication, and I really enjoy that connection: it's humbling and liberating.

When I first started writing songs, I was in middle school, and I had a habit of laying around listening to CD's and reading the lyrics on the inserts. I have always loved words. It might be a little embarrassing to admit now, but during that time I was in to a lot of what you might call 'Myspace-era' bands, like Panic! At The Disco, Fall Out Boy, Say Anything, Kimya Dawson. I think the dramatic flare and wordiness of those bands inspired me to express myself lyrically, in some of my first songs. Also, not so embarrassingly, Queen...and a band called Foxy Shazam...both had an impact on me at that time because they went so far outside the box with their music. Top it off with my parents both doing a great deal of writing and creating when I was growing up, especially my mother, and I'm sure their influence will always be a aprt of me.


So, tell us more about how and when you started playing and writing music. It sounds like you're parents were likely enthusiastic...

I grew up around two theatrical, creative parents who were writers and aritsts who loved to sing, so music was always a big part of my life. I took piano lessons when I was 5, and, funnily enough I did not enjoy lessons, but ended up playing again in high school (Arts Academy In the Woods). I was very in to dance and musical theatre, and wanted to be Shirley Temple when I was little, so I suppose I always wanted to be a performer. But I had an interest in design and visual art, so I didn't foresee myself being a singer-songwriter. That seemed to happen while I wasn't looking...

I  had been playing guitar a little, but took a guitar class on a whim and within my first year of high school I wrote my first song. I remember nervously playing it for my teacher in the hallway; I'd written songs before but none of them stuck, so this was a big deal. After that, everything unfolded naturally and eventually, that guitar teacher, nate Montgomery, helped me record my first album. My second album was recorded at AAW. One of the songs (that second album) was recorded after final exams of senior year, just before the bell rang.

Talk about re-shifting conceptions about solo acoustic acts. Your songs are much more declarative, much more nuanced, then you'd anticipate with a folk singer performance. And, what kinds of feedback or reactions to you typically get from audiences after a set?

As a solo acoustic act, it seems like I always run into the same issue of people assuming I will be singing about love, or that I will somehow not be exciting or fun to watch. Especially as a woman, there seems to be a notion that I will be singing about boys and heartbreak. However, these topics don't come naturally to me at all! I find what I think about most is the world! People! Religion, and really, all the nuances of the human experience. I observe people and relationships and I love telling the stories of people I meet or even people I create.


"Pretty Ladies" is interesting because it was born out of my personal experiences, but I brought the listener in to the experience with me; I wanted to empower them as well as myself. Sometimes I play it and everyone finds it humorous, other times maybe one person snickers, sometimes people hoot and holler during the chorus and others times it's more subtle. The consensus seems to be that people really appreciate the message. I once had an audience member say they felt empowered by it, even though they were a man... You want that, you hope for it to reach people across the board and not just call to one specific group.


With "Dumb Kind," I was standing up for myself. Human beings always seem to want to put everything or everyone in a box and categorize them, and I suppose my dislike for that is what brings about my desire to empower people who listen to my music and encourage them to question the norms. I grew up with a single mother who has always been unique and outspoken, and having that non-traditional mother figure is something that has inspired me to be myself.

For instance "Big Mistake" was written just this past November, and although the song has an optimistic light, when I wrote it I was feeling some of the worst feelings I can recall. The song really helped lift the burden of those emotions. But most importantly, I am very excited about the message behind this album! On the back of the CD I wrote an album statement that reads:


"Patron Saints of the Ordinary is dedicated to those who have crosses to bear that are not recognized by major institutions or organized religion. Those of us who fight battles every day, internal or otherwise, & live our lives to the fullest even if our beliefs or actions are unpopular. The saints we know & hear about in churches have much in common with the free-thinkers & modest workers of today. We may not be holy, flawless, or unblemished, but we are the patron saints of our own ordinary lives."

In our society we tend to glorify celebrities and models, but we neglect to acknowledge the importance of the struggles of every day people. I wanted to reach those people with this album. To tie my experiences in with my observations of the world and lift people's spirits.

And, what are you looking forward to... Both with the farewell show for DTB's Neebo, as well as the next couple months?

The thing I'm looking forward to most about Sunday is getting to share everything I have been working so hard to complete! Many of these songs have never been heard before, so that is very exciting to me. Matt Wixson, who will also be performing, is a mutual friend of mine and Neil's, and he and I both performed at Downtown Brown's official farewell show--so everything comes full circle for this show on Sunday.  I also look forward to kicking off this upcoming tour to LA, and the chance to share the journey with my friend Neil who is moving there. I think it's going to be tons of fun and I can't wait for all of it! 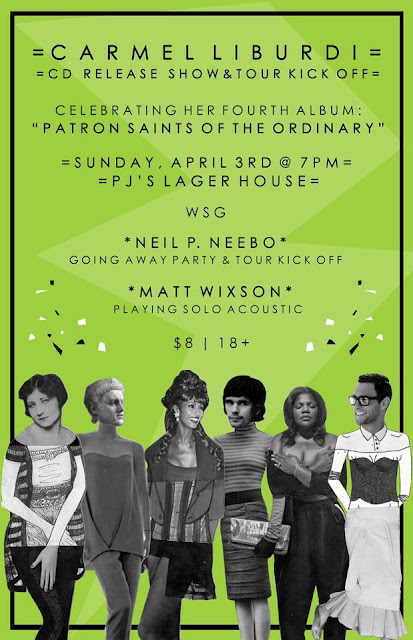 www.carmelliburdi.com
Posted by jeff milo at 5:45 AM