I ask Ben Collins some fairly rambling questions and, yet, he still apologizes when he has no recourse but to answer in the same route. But Ben’s great when he gets to rambling. In fact, I’ve been waiting to pick his brain like this for a while now…

I interviewed Ben about a month ago, because it seemed like he was starting to make more of a go at it, when it came to nurturing his own personal music pursuits. Ben is an Ypsi-based producer who, with the help of drummer John Fossum and bassist Christian Anderson, began more actively cultivating his solo compositions (characteristically inclined toward fuzzed-out power-pop and ambient-haunted indie-rock).

Years back, Ben was the guitarist in Lightning Love, coming along for said trio’s adventures through two exceptional full length albums, consistent regional performances, sporadic tours and the fomenting of a surplus of local fans. Minihorse is just as charismatic as Lightning Love was…but it’s got its own nuanced nervous system and whimsically-pulsed meditations.

Long story short, Minihorse are shedding their air of apprehensiveness and cannonballing into the performance pool; right into the deep end. More than that, they have a new music video that they’ve been kind enough to permit me to premier for you… More info on the new "FYea" video HERE.

Let's hear about the new EP...

--
So tell me more about how you’re feeling, Ben… How are you feeling as a songwriter, as a producer, when it comes to the…uptick in initiative, as it were, to take this band from the back-burner of your work docket and give yourself some YouTime. To give John and Christian some Minihorse time!

Let’s talk about the decision to put out this EP, More Time and, also, about all that you-time. Does it feel like you three are astronauts striding down that gated, girded walkway toward a rocketship…?

Ben Collins: First of all, I’m glad you said “Rocketship…,” cuz I love that band.

But to answer your question, I need to start out by talking about rap. And by the way, I credit Aaron Diehl (from Lightning Love) for 100% of the rap I listen to, he’s encyclopedic.

I spent years recording rap, starting at a studio called 40oz sound. 40oz was later bought by the great Jim Roll and converted into Backseat Studios, by the way. But I was recording all these guys, and they’d be on schedules. They’d book studio time and come in to record like they were punching in and out of a job. Crazy work ethic. And then you think about all the mix tapes, collaborations, etc. Rappers are putting out a huge volume of material on a consistent basis, and it starts to feel unsurprising that rap has so wholly taken over the music industry. It’s deserved.

To be fair, rappers are also more agile, for a number of reasons. The key element is the vocal, so recording and releasing a mix tape in short order isn’t impossible. I think Lil Wayne toured with a U87 or something and would record in hotel rooms. So the landscape is different now, and “bands” exist in that same landscape. We need to be able to work quickly, and with high output. That means learning to record yourself, developing every element of your own sound, and being solely responsible for the production, including a potentially fast schedule. It means knowing what kind of sound you’re after, everything from the song to the compression ratios. It’s a tall order.
Sorry for the long answer.

So it comes down to pushing yourself toward being prolific…
Ben Collins: Of course! Guys like Bob Pollard and R Stevie Moore have had this approach for years. But so many bands just completely stall…, taking multiple years between releases. I’m not interested in that. I’ll put out a traditional album like everyone else, but there’s no reason I can’t release a bunch of stuff in the meantime. I’m planning at least one more EP or maybe two before we put out our first LP.

Well, let’s talk about how this band’s changed… You had lots of songs worked out on your own, even though you kept them secret… But then you started this band more than a year ago. And yet, here we are, just now, letting the world officially hear a debut.

Ben Collins: Some of these are older songs. “More Time” and “FYea” are both on there. Those two songs are basically mission statements for this band, and they needed releasing first. But there’s new material on the EP, also.

John and I just went back through the old dropbox folder we shared and listened to a bunch of our old songs and it sounds completely different. I’m glad we waited a bit to find our footing before starting proper releases.

As a songwriter, I can only encourage the ideas to come. Try this: sit down. Sitting down? Good. Now: have an idea. GO! Did it work…?

So writing songs, put another way, is just “…having ideas.” I can only ask my brain politely, and usually my brain is a dick. So I have to trick it, and do something else for a while. Hey, you’re driving with no way to record sound? Here’s a great song idea. If my brain doesn’t respond to reverse psychology, I’ll deprive it of oxygen, or administer freezing water or electricity. [For more on that, see our previous interview.]

And, why does Ypsi work for you? I feel like you could easily thrive in a Brooklyn or a Portalnd or wherever else… Unless…Unless you need Ypsi!

Ben Collins: Ypsi works for me because it’s a great community. I just like all the people who live here. It’s great to walk down the street for coffee and see five different friends of mine. It’s also not prohibitively expensive, so I can have a decent living space with a studio in my home without needing to buy the Kroger brand yogurts. 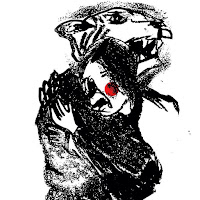 What have you been working on lately…? Aside from the Minihorse EP, you also have lots of folks stop into your home studio to work on stuff. You’re also in another band or two…

Ben Collins: Minihorse has been working on a lot of new material. As I mentioned earlier, we’ll have at least one more EP before we release our record. We’re also working on a music video, which may or may not be done by the time you post this. (Side note, Jeff, maybe we should think about that.. when is this coming out?)
Outside of Minihorse,

Starling Electric just released the record that we’ve been working on for years, which I’m really proud of. I also just finished recording Double Winter, who are great, and mixing Rebel Kind and Stef Chura’s stuff, also great.

OH..., and The Boys Themselves did a fuzzy ELO cover last week, and I’m mixing that stuff with Christian. I’ve been doing some ambient / noise music stuff too, and composing for some documentaries, including a 360 degree Oculus Rift documentary on Sudan that was produced by Frontline last month.

Above, I alluded to your signature style of dread-pop. Taking the power-pop vibe of Lemonheads or Teenage Fan Club and channeling into more of a fever-dream/David-Lynch/cinematic state… Do you want to get poppier? Do you want to get riffy-er? What do you want?

Ben Collins: I wish I could design songs like that. I just try my best to replicate the initial thing that pops into my head. Beyond that, I can only hope that someone else responds well to it, or that it reminds someone of a breakup, or a crush, or a murder, or whatever.

Well…, what does the future hold? What are you looking forward to…?

I notice he didn’t include sleep in that itinerary… 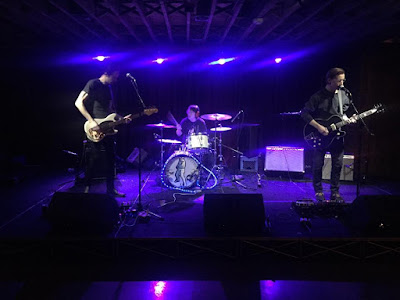