Elizabeth Theater At The Park Bar 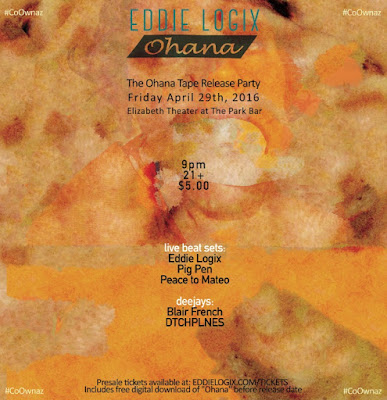 Detroit-based producer extraordinaire Eddie Logix has a new tape of beats compiled as a manner of making a thankful soundtrack for his longlist of collaborators and local fans who have supported him over the years. Logix has been at it, now, for upwards to a decade, and this grouping of grooves and assembled rap beats is intentionally fun, laid back and nostalgic.

While Ohana certainly is continues to augment his sensibility for the atmospheric and ambient tropes, these 16 vignettes are each no longer than about 2 minutes, so they feel almost like photobook montages that breeze by and seep some sweet summertime serotonin over your inner spirit's soundscape. There's a just-barely tamed frenetic energy here...like a sonic embodiment of a fighter bobbing-and-weaving his way into a rematch or a cyclist getting their second-wind.

Ohana is a Hawaiian word that resonates with the #CoOwnaz ethos, translating to "family..." While much of Ohana is endearing and illuminates the importance of friendship, it inevitably sprung, at least in part, from a dark period in Logix' creative/production life...

"The beats come from experimenting with new sounds, samples, and techniques after much of my gear and files were stolen in a studio break-in last year," said Logix. "(Ohana) is the product of starting over from scratch, working at a new space in Assemble Sound, and listening to/reading a lot of John Cage."

Logix wanted to release Ohana on tape because he, personally, prefers either cassette or vinyl exclusively when he's listening to music. "The length and sequence of this project was always designed for a 30 minute cassette release," said Logix.

It is digitally available this Monday, April 25. The release show is Saturday, April 29th. More info / / Tickets
Posted by jeff milo at 5:00 AM