I tell Paul Corsi that the Go Tiger Go song “Inhale” is ridiculously catchy. So catchy…

The intent of the group is essentially to defy preconceptions about power-pop, and inject it with a bit more grit, more substance, and more introspection… The intent, obviously, is to produce an insanely catchy recording that’s fun to listen to… But the other side of it is a keen appreciation for the live show; particularly the live show as experience. 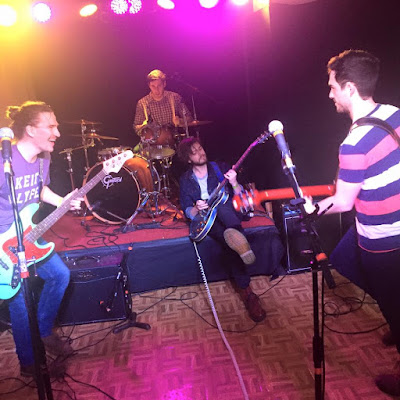 Go Tiger Go want you to come up and talk to them after the show. They want you have a beer with you before the show. They want you leaving the show with their songs stuck in your head. But they want all those things for the right reasons; namely…that their authentic charisma was enough to charm you. Can you practice that? No. But these guys start off with two key ingredients: nice & humble. The third ingredient? They can write a damned catchy pop song.

Having a sound that’s got personality is “…the foundation of Go Tiger Go…” said Corsi, who started the band a little more than four years ago with another since-bygone lineup of players. Puz and Patten joined the band about three years ago, while Delaney came on board about six months ago. The song “Inhale” was written earlier in their run and has even developed its own dance. Rather, local music fans who come to Go Tiger Go fans invented one for the song, wriggled along to the infectious chorus as some hybrid of the twist and a baseball stadium “wave…”

The bands’ collective influences range from the Beatles to Rush, pure pop to meticulously arranged prog, with garnishes of garage, grunge and 90’s indie-rock. Corsi said that his favorite band from Detroit was always The Von Bondies, and particularly praised their Lack of Communication album as an ideal influence for GTG’s own manifestations of gritty buzzsaws & fist-pumping fun.

I ask if he’s just going for pop with way less sugar… And he says, “…well, at least without any artificial sweetener…”

Go Tiger Go are throwing an EP celebration show this Saturday at Small’s. The band’s had the three songs recorded a little while ago, but “releasing” them, digitally, is essentially their starting of a next chapter, essentially. Back to that charm thing? That being-nice thing? Corsi says he’s just giving the songs away because GTG haven’t “deserved” the right, so to speak, to charge their fans. It’s something they want to earn, wholly and sincerely…

More than once, Corsi repeats the phrase “I just want people to have a good time…” But, going back to that giving-away-their-music-for-free notion, Corsi actually has some extensive thoughts and arguments about that.

“Each show is like an interview, for us,” said Corsi, referring to an encounter during which they should be expected, in a way, to win-over an audience. “It’s about breaking that fourth wall between the audience and musician; you’re not just there listening, you (the audience) should be participating…”

The band wants to get to work on the next EP and work with the most exceptional producer they can possibly find. The goal, the intent, this time… will be physical copies. But MEANWHILE, you can hear more songs here, and catch the band Saturday at Small’s…


w/ White Bee, YUM, and The Messenger BirdsSaturday, May 14 @ Small's