On October 3rd, Ann Arbor-based singer/songwriter Mike Vial released A World That’s Bigger, a full length record of his most poignant and soulful batch of acoustic folk tunes to date. On October 6th he was struck by a car, crossing Huron St on foot, making his way to the Ark to play at the Vets for

Peace John Lennon tribute. “Ironically, my world has gotten smaller since the accident,” said Vial, who has been recovering at home, since.

Vial is still celebrating the release of A World That’s Bigger with next Saturday’s performance (10/29) at The Ark, opening for the Appleseed Collective. 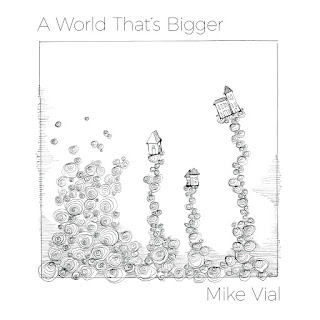 The Appleseed Collective & Mike Vial
Oct 29 at The Ark

“I’d emotionally forgotten that I actually released a record. I’ve since been a present father at home, spending time with my daughter. I get really upset thinking she could have grown up without her dad.”

Vial has been releasing music regularly for almost 10 years. He’s been performing around our state and across the country for more than several years, having surpassed 1,000 performances. His voice, his performances, his tuneful guitar strums and his sentimental & ponderous lyricism makes him one of the most endearing artists of the last decade.

The album is a warm, crisp collage of Americana coiled with lots of contemplative lyrics narrated by an artist who sounds like he’s enjoying the radiant sunrise after a proverbial dark night of the soul.

This is the album that finds the (very melodic) peacefulness echoing an existential investigation of the day-in/day-out anxieties so many of us go through. To me, it felt like an album bathed in the calming light shone down from the exit of a tunnel. But then….just as he reached that exit point of ease, Vial had the accident.

There are a lot of literary and Biblical allusions within the lyrics of the record, and they are spinning in my head,” said Vial. “The song “We’re Not Here Anymore,” which is contemplating fate and death, is on my mind, lately: “There’s a ghost on the sidewalk, a devil in the street. One will never welcome, one we’re meant to meet…”

Vial was carrying his main guitar, a Taylor 514ce which he’s had for 15 years, and luckily it survived. This was the guitar he used on the recordings, produced with Mike Gentry up in a cabin in Indian River. In addressing the lyrics, Vial said that he could only hope that listeners can find comparable catharsis through these “universal challenges of adulthood.” Vial is a former school teacher, and there’s this nuanced affability with the way he presents his musical ruminations, much like a guide (or teacher) would to a curious class, but with a humbleness underlying a poet’s submission to certainly not having all the answers. “This record tackles weighty topics, like miscarriage, leaving one’s job, losing a family member…doubt…”

“Recording with Mike Gentry was a perfect mentorship and the cabin provided the best reflective setting,” Vial said. “The cabin is covered in knotty pine. It felt like recording in the bellow of a guitar-ship. I was chasing a certain sound with this record, like Captain Ahab chased the whale in Moby Dick. I was consumed by this record because I had something to prove to myself. All of my previous recording experiences have been fun, but I have never captured my live performance’s emotion on tape.”

A World That’s Bigger was done completely live: no overdubs, no fixing, no click-track. Vial wanted the same emotion and energy as his live performances captured on the record. That mean 150, repeat, 150 takes, and collecting the ten best. “I had road-tested nine of the ten songs, and consumed a lot of classic 70s era records, especially Nick Drake’s Pink Moon. I knew exactly how I wanted this to sound. But getting it live was a gamble.”

“I’ve always viewed recording sessions as snapshots of where a musical artist is at that moment. A World That’s Bigger is very much that type of snapshot.”

Famously, Vial’s wife, journalist Natalie Burg, said she would not marry him unless he quit his teaching job to pursue music full time. I still feel like that prior experience informs his charismatic manner and literary lyrics. “Previously, I was focused on the guitar portion of my shows. Now I’m in a new chapter—a folk tradition, sense of community, storytelling….”

“I tell a lot more stories in the set. I’m very aware of not becoming A Mighty Wind, but stories can hook people into the song. And being a teacher allowed me to find an animated self. I learned how to keep 36 freshmen students’ attention for 90 minutes. That experience has seeped into my pacing of a gig; and a lesson plan models a set list for me.”

Once Vial is fully healed, he knows he’ll feel compelled to make up for lost time, since he’d previously planned on substantial touring for World. “But, I’ve been doing more than 200 gigs a year for quite a while, and now that I have a family, I’m discovering how much we can handle. The accident is making me respect time even more.”

It seems, after the accident, like another journey down yet another tunnel toward a new source of light is in the works… That said, I’ll add this, editorially, I adore the way Vial muses on the art of songwriting: “Songs come in spurts for me, I don’t chase muse. I ran track in high school; the last thing I need is music to become a race. Don’t get me wrong, I work on music daily, but if songs ideas don’t come, I don’t force them. Instead, songwriting for me is like collecting rainwater in buckets, until they overflow.”

The city of Ann Arbor, where he lives, and the splendor it exudes in the peak of autumn’s display polychromatic charms, has been particularly therapeutic for the Vial family at this time. The fine folks of the community as well, over Facebook through supportive messages, and in person at venues, are cheering him on… “Normally, I don’t get to see many concerts since I’m constantly gigging. I’ve been finding time to hobble on crutches to shows during the fall. I just saw my friends in Sedgewick play at Café Verde, and my friends Frances Luke Accord play at the Ark. I’ve been reading Nick Hornby’s Songbook, a set of essays about his favorite songs. I’m reconnecting to music. The buckets are getting full. I’m going to have a burst of new songs soon.”

Vial said he’s trying to find his way, deeply respectful and conscious of all of the talent, history here in Ann Arbor, and the energetic wave of talent, year to year, that serenades its music halls. “I enjoy many fruits because people have invested in this community for many decades, including the arts. So I want to engage in a positive manner, and bring something to the table.”

Release Show at the Ark is still on:
October 29, the Ark
opening for Appleseed Collective