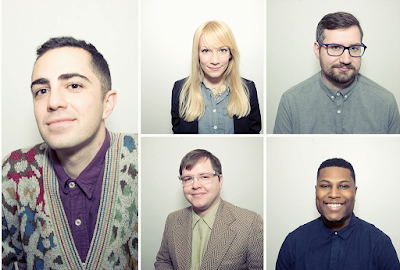 Two Cheers are two-thirds of the way through their current series of singles, with "Black Hole" set to debut on November 8. They're performing in Hamtramck next weekend, and you can listen to "Fireball," which came out just two weeks ago. Assemble premiered the song and had some words to share about it, here.

"Fireball" opens with this gliding synth, while an urgent guitar streaks neon-cool riffs above it; distinguished from previous singles like "Splendor," for winding down the aerobic tempos and setting a bit of a shuffle, a slow dance, a ponderous pop ballad. The chorus sails with those harmonized backing vocals while the verses have a bruised and blunt confessional spill. "Pepper Tree," a b-side on the latest single, brings it back to their coiled burst signature, aerodynamic guitars and jet rhythms while lead singer Brian Akcasu goes from soft croon to ceiling swinging belt.

The band, Austin Lutzke, Carlton White, Megan Marcoux and Owen Bickford, has been steadily gigging at local venues over the last year, while they whittle at the 50+ new songs that Akcasu has been developing. I wanted to catch-up with band leader Akcasu about re-planting his roots back into the Detroit scene after a long stretch of establishing his music career out in L.A.


Definite change in tones and themes in the lyrics after you've moved back and started this latest batch of songs with the group. Tell me about what has kept you motivated most of all, and what was it like, those first couple months back, to come back to Detroit and get Two Cheers its footing into this scene
Some things have been difficult since moving back, like losing my grandmother who cared for me everyday when I was a boy and also my mom getting a very rare and stubborn form of cancer. Also it's very weird being away from my friends, who are all spread out now. On the other hand, a lot of great things have happened this year with the band. Everyone who knows me knows I beat myself up about everything and am generally very impatient about accomplishing my goals! But I mean, within the first couple months back I had found my wonderful new band members and we are writing and recording lots of new music for an LP to release and tour behind in the Spring of next year. We've also played some awesome shows this year. We’ve met a lot of excellent people and made some real friends in the area. Playing both Hamtramck Music Fest and Dally In The Alley was awesome, and we are so grateful for those opportunities! Meanwhile, we teamed up with former members of Two Cheers to create these new singles we’ve been releasing. So, it’s actually been going great and I have no right to complain about anything!

Here's another one of those recent singles...


“Condos” has some of your most contemplative and, at points, existential lyrics. The guitars are very expressive as well.... And“Fireball,” just as a title, suggests something vibrant, fast, but possibly fleeting..., and something that ultimately crashes….! And I haven’t heard “Black Hole,” yet, but that, again, is a bit of a foreboding title. Can you talk about the catharsis your finding with these songs and what you’ve found most fulfilling about the creation process?
As far as the lyrics, I would agree that most of them have an existential bent and a sense of approaching doom. It was like that on Splendor as well to some degree. It comes from my obsession with the ephemeral nature of life and the fact that I don’t know how long I really have to live. But it isn’t pessimism or resignation, I am always using those dark elements to bring every day life into greater relief in my lyrics.

When you can vividly feel something ending or passing, it makes you realize how precious things are right now in this place and time. It’s a way of remembering to take nothing for granted and to burn brightly for the people around you, like a fireball, every day. So, for me it’s part catharsis, as you suggest, but also a way to simply remind myself to look at life in a holistic, broad-spectrum kind of way. As I said, I tend to beat myself up about details so maybe I need these little reminders even more! The most fulfilling part of doing these songs was writing and recording them very quickly… Perhaps even too quickly. I treated the demo process as the final recording session, for instance I had all the good amps and good microphones going all the time in my studio, so that I could capture those initial sparks of creativity that are hard to recreate later.

Between LA to Detroit, what have you learned, most of all? What’s been your biggest takeaway? Does it matter, anymore, where a band is…where they’re based, in order for them to forge an eventual career or tour? And what are some misconceptions about LA that you could dispel for us…
I can’t really speak for other bands, but for Two Cheers it made more sense both pragmatically and emotionally to leave Los Angeles even though it’s a music hub and it’s where I’d spent 15 years of my life. Los Angeles is crowded with bands, it’s expensive to live there, it’s geographically enormous, it’s always awake, it’s extremely hot for 9 months out of the year, the people are very-much big city people, etc. That’s just not for me, and I wanted to be close to my family again as they start to get older.  For a lot of people, Los Angeles is just right.

But I moved back to Michigan on the hunch that the pace of life was a little mellower here, I could have more space in my home for recording and rehearsing, the cost of living would be more artist-friendly so I could work less at a day job/commute less and spend more time on music, and there would be more camaraderie and less cliquishness within the scene. So far, I think I was right about most of that. That’s the biggest takeaway. I love it here so far. I feel like we have a great home base here!