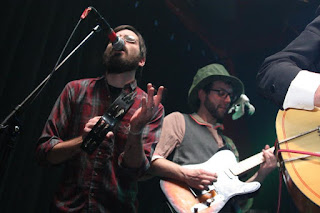 Back in July, I checked in with Adam Pressley about the future of Ohtis. Now..., here in October, that future is starting to actually happen, more and more, day by day. The band's creative energies flow from itinerant singer/songwriter Sam Swinson, with Pressely based here in Michigan, keeping touch and consistently collaborating on song-construction.

Swinson (currently based in L.A.) and Pressley once had a full band behind them, originally based out of Illinois, that toured and released music throughout the mid/late 2000's. From 2009-2015, the duo were not working on any music, but that changed when Ohtis was essentially jumpstarted again for recent (and forthcoming) tours.

It's since paired down to a duo, but they continue to make splendidly skewed country and abstract folk meditations, with inventive percussive patterns and evocative intonations in the vocal department. 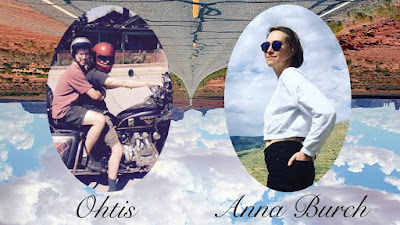 Ohtis is kicking off a tour with singer/songwriter Anna Burch (of Frontier Ruckus) tonight at Donovan's Pub. Meanwhile, they premiered a new music video today (streaming below). Tour dates at: http://ohtis.com/


Milo: Adam..., tell me..., how's all things: Ohtis?
Adam Pressley: Things are superb.  We're currently doing the pre-tour scramble, today...Gotta package these tour CD's, buy a drum head, get the oil changed, practice the set, feed the cat, water the plants..., And I need to buy a new pair of shoes.

Milo: And Sam came in to town? Did he travel by motorcycle? Did he hitchhike?
Pressley: Funny you should ask.  Sam was actually driving his dad's truck here from LA a couple days ago, but it broke down in Nebraska.  So, he had to take a 22-hour Greyhound bus trip to Detroit.

Milo: What kind of groove, what kind of mindset, what kind of creative rhythm, does one have to set in to, when one is in Ohtis, i.e., one dude in Michigan, one dude in L.A? What is that work experience like as an artist/musician?
Pressley: Sam wrote lot of songs in the 6 years we weren't playing music together, and more are still coming.  Since we have an album's worth of songs ready for release, and the bones of another album's worth of songs tracked, we have the luxury of being able to flesh out new material when inspiration strikes.

Milo: What are you guys working on lately?
Pressley: We're mixing a collection of songs with Colin Dupuis (of Zoos of Berlin), and continuing to write and record more new songs.

Milo: And what are you most stoked for, hopeful-about, in the near future?
Pressley: Stoked for: Sam just started a pot of coffee..., and my eyeballs feel dry right now....  Hopeful-about:  ...there being enough coffee for us both to have a sufficient amount.  It was the bottom of the bag, so it's possible I will only be able to have about a half a cup or so...


Update: Adam got a full cup of coffee