I thought I'd know exactly what to write when I got to the page...

Some songs you don't want to impugn with description. You don't want someone to reduce what should remain an ineffable feeling into cold compartments through blog-font hieroglyphs... But one of these days I'm going to stop being flat-out astonished by what Chris Bathgate puts out... I think that day will come, anyhow. Maybe it won't....

His voice on this recording, it sounds as though his very feet are definitively off the floor as he sings into the microphone, like his aura, at least here on the recording, defies gravity. Or maybe I'm floating... ?

*You know..., on that sidenote, I'll never forget that time someone asked me, with sincere curiosity, whether or not I took drugs before writing my essays about music. They deduced that because of all of the purple adjectives and the way a sentence can so sweetly slide around in cadence like dewdrops on a curved palm leaf lilted out into space.... But the answer is: never. No actual drugs. Just music. It's just that sometimes my discourse reads as though I'm immersed. Too immersed. Yes, totally too immersed. ...to where I get carried away with the tidal force of a specific piece of music.

Man..., "Northern Country Trail" isn't a piece of music, its its own domain. It's a realm. A headspace, onto itself, with out boundary. No, wait... I'm going too far. The song is taking me too far...
The guitars flirt with this sloth-like lurch upwards, outwards, steadily extricating from the gossamer confines of the mesosphere, the loops and layers surround the listener with an imperceptible vapor that evokes this oh-so-gradually onset of what seems like weightlessness.

It is a very simple song, really. But each sonic layer, like a brush stroke of individual intensities, denotes its own variation on an emotion, from meditative serenity, to anxious panic, from renewed determination to pensive dread, a softly simmering drone at its ground level, the mist of a piano as it rises, the fog of reverb and distortion and the twang acoustic guitar as you get to eye level, and above...higher up there, that voice, which has always had this ghostly quality to it, despite how rich and resonant and full-hearted his voice sounds, it is ... (due in part to the productions nifty panning)... always had this elemental quality something that.... something that defies description. (Which is where I started this essay...)

This song takes its time. It wants you to catch your breath. It's a head-clearer that somehow clusters the whole of human existence into its purview for consideration. Ya know... that's almost what all great Chris Bathgate songs usually do...

I'm off to re-loop this song and start floating around my living room, s'more....

Chris Bathgate's new album, Dizzy Seas comes out May 19 via Quite Scientific 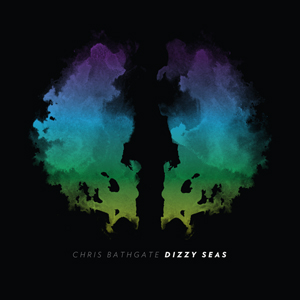