The Internet is constantly moving... akin to the tempo of a punk rock song...

So, as of this writing, Detroit's Devious Ones have already had their new single "Djarum Summers" streaming online for about 23 or 24 hours... Which you can find more info about, here. 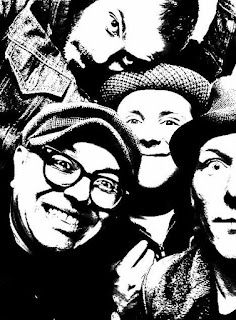 "Djarum Summers" pulses with nostalgia for past days of debauchery and musing over the nuanced ways in which they've shaped ones present-day disposition. "What did they know..." the chorus asks, sneering back with that same youthful defiance at anyone judging their past proclivities, but answering in the next verse, "What did we know...?" I know it's fast, and rigorous, and aggressive, but there's a lot o' heart in this tune. The Devious Ones found this fine sweet spot where punk can be fun, without patronizing any "pop;" the hooks are swift and indelible, but there's still a lot of rust and grit spewing out of the amps.

And then "Court Clothes" gets even more fierce in its tempo and instrumentation, vitalized with a punchy monosyllabic verse that nervily knees its way to this up-and-down melody, embossed by throaty harmonized shouts. It's a head-banger, for sure... something to rile you up.

But this song, just like the lead single, surges forth with a bit this purity, and by that I mean...you can tell how much love these four Detroit dudes have for punk-rock music. And at this point, having played it each, individually, for long enough and with a handful of other groups, they can use it to bring that love, if you'll allow me some schmaltz, to you, to me, to anyone... And that's what makes it fun.

Find em on Facebook.
Check out the release party.
Posted by jeff milo at 5:43 AM