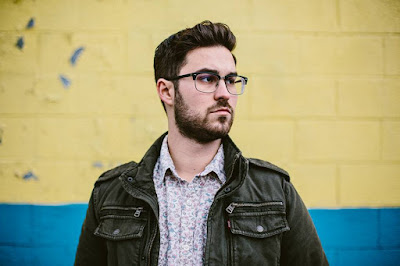 Today, his musical brainchild, Jet Rodriguez, is premiering a new song: the b-side to "Self-Preservation" is called "Forever Is A Long Time," right here on Deep Cutz!

Navetta has been busy since the new year, having filmed a preview of "Self Preservation" with indie-music promotion platform Fanic Music, and then got a featured spot on Americana music podcast, the Miller Tells Her Tale.

I first encountered Jet Rodriguez six years ago, almost to the day..., Navetta has been pretty much a lifelong songwriter who dove right in to the local music scene at a very early age, fronting this indie-rock project that blended cinematic/surfy sounds with pop and Americana.

Over the last couple years, however, it's evolved into a pop-inclined patchwork of tender tones, folk-rock flavors and breezy earworm melodies. Navetta's taken on the role of Americana-troubadour here, with these two recent singles, tumbling out contemplative poetics with that soft mid-high range that blends a croon to a cautious whisper.

Both this single, and the previous "Self-Preservation" were recorded entirely by Navetta in his home studio - and that labor-of-love energy is palpable, when you listen back. Something hard to place is giving this recording a bit of radiance - the kind of subdued glow growing over a spring morning's horizon. This track, premiering today, includes one other contributor, however--with Scott Demers providing upright bass.

As he's developed, Navetta has attained a greater appreciation (and sensibility) for minimal arrangements; everything from the acoustic guitar, to that bass, to the sparse pianos, is falling into place just when it should... The song strolls, or almost slow-dances, rather than gallops - this adds an essential litheness that gives Navetta's aesthetic that bit of pre-summery mellow/spry-ness.

"Forever Is A Long Time," like any great song, spurs one to be deliberate in considering the direction life's taking you...Even if Navetta is still a young songwriter, he's still wary enough to wonder quite a while ahead of himself, in years, at where life may take him... And that's when he starts writing these lyrics, like the ones streaming above^

Because Forever is a long time, man...!!  No one can predict what's ahead. The endearment of Navetta's latest single, is that it's coming from a heartfelt place, where he's saying, whatever happens, ...he's going to try his absolute best.

Follow Jet Rodriguez this summer, as I'm sure more new music will be on the way.