Detroit's Shady Groves have a busy month ahead of them. But first, they're letting me premier their new music video, "Stay Strange...," check it out.

The band started out as a trio about three years ago, but have since grown into a quintet (with one of its founding members departing the group). They not only got this new music video together, but they're getting ready to re-release their debut full length, Bitzer, from early 2016, with a few songs from its original tracklist cut and replaced by some new & old b-sides.

Stay Strange is a dark, dreamy short film that sorta flows through three movements; the video was created/edited by Elaine Smith.  Tone, tempo, and the timbres of that mandolin (and that lightly touched atmospheric electric guitar) shift harmoniously with the drums along to the visual energies exuded from the screen's two actors as they slow-dance and swoon through a quiet, contemplative night together.

I've always associated the breezy pop and jangly glides of this band with this springtime/rejuvenative energy - something that propels the soul, or maybe even just chills away said-soul's lingering tensions. The neo-chamber-pop sparks combine a mellowed groove with a heart-on-the-sleeve crooner poetry. I'm eager to see what they do next...

Next weekend, they're playing at the Loving Touch (May 19th) with Jerry Dreams, Mom Barley, and Almost Free. (Info). Later on, on Thurs., the 25th, they'll be at the Hard Rock Cafe in Detroit for a Battle of the Bands! 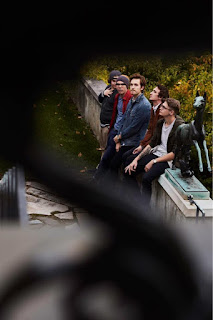 INTERVIEW
Tell us about the song, "Stay Strange," and why it fits so well into the Shady Groves canon?
Adam Fitzgerald: Dylan had the idea of having the song be in two parts, first slow, then the last half kinda peppy. It's really short and sweet. I like "Stay Strange" because I feel like it's an honest love song in the way that it doesn't hyperbolize anything like other love songs might.

Dylan told me he finished this song because his girlfriend told him he writes all these great songs but never actually finishes any, so he made it a point to finish "Stay Strange" and it ended up being for her. I think it's kind of an anthem for true love with some realness to it.


Dylan Caron: Exactly like Adam said, I wrote “Stay Strange” for and because of my girlfriend Josie. At the time I would get home from work about an hour before Josie and the song was made in about that exact time. I was trying to kind of sum up our relationship, without over complicating anything. I wanted the song to be short and happy. But to also highlight small things not usually incorporated in a love song. Kind of just tried to capture a very average day of ours. 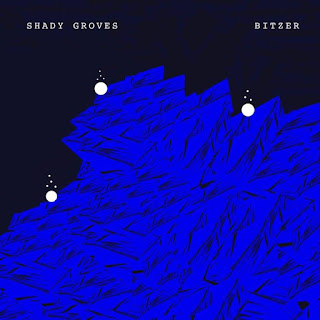 Tell me more about the video, the idea/story behind it, and about Elaine Smith...
Fitzgerald: Elaine Smith directed this video, we have done a couple videos with her now. She is graduating Oakland University after studying film. We love working with her because she is really really good at editing and creating experimental visuals. She had the idea to make the "Stay Strange" video more like a short film, which ended up giving us a chance to use more of our music.

The first song you hear is a demo we recorded of a new song Dylan wrote called "Me & You" which is kind of a sister song to "Stay Strange" cause they are both honest love songs. I like both songs because they are cute but not cheesy, they feel genuine to me and we work hard to try and get our music across in the right way. While "Me & You" and "Stay Strange" play, the video shows a new relationship blossoming.

There's three songs inside of this video.... It starts with "Me & You," then we go into "Stay Strange..." What about the third part of the video?
Fitzgerald:  The third and last song you hear in the video is "Dysthymia" - which Dylan recorded with Jeff Yateman (aka Jemmi Hazeman) as his B-side for Bitzer. That part of the video has a different vibe, kind of how life can be after you are in a relationship for a while. "Dysthymia" is a unique song because it touches on the darkness that can be in life and in love, but there is this longing to it. I think of that song as a song that encapsulates the struggle of modern day life and the questions that daily routines grind into us until we aren't even sure what's what anymore.

What can you tell me about the newest songs you've been working on?
Fitzgerald: We have more songs than we know what to do with. We are trying to whittle the track list down to 12 songs for the second album. Dylan & I have written almost all the songs together, then we'll bring them to the band, but certain songs have been born out of jams so there's a variety of vibes and structures. Everyone in the band writes, so now that we have a solid full band we can really bounce ideas around and it makes the process go a lot quicker.

We have all been going through a lot of crazy shit lately so we are trying to learn from it and relate the weird reality of being alive through our songs. We are really hard on our lyrics and with this album we are really taking the time to do everything in our power to make the best album we can. Elliott Smith used to write so many different versions of his lyrics, F. Scott Fitzgerald was known for his intense editing and constant revising; the extra work shows so we are trying to be patient and take our time.

How would you describe the new stuff?
Fitzgerald: We have some songs that are like hypnotic grooves, but we also have some songs that are like a combination of folk and shoegaze or something. That probably sounds bad. We always joke that we don't really have a genre. We like to make our instruments sound anything other than what they actually are, we like weird sounds and different combinations and layers. Plus we have songs with different instruments like banjo, ukulele, random old synths, different types of percussions. For this second album we have really tried to work on our best songs and keep the focus on the song and as a band do what's best for each particular song.

Over the last few years..., how's the band changed, or developed?
Fitzgerald: When we formed Shady Groves it was just me, Dylan Caron and Jeff Yateman. Dylan and I had these songs that we were working on, some we wrote on our own and some we wrote together. The idea behind Shady Groves was to have a supportive collective of musicians, like Broken Social Scene or Deerhunter or Grizzly Bear; different songwriters working together. That is still true of Shady Groves because we all write music and we all work on songs. We have so many songs we could never even release all of them as Shady Groves so all of us want to start releasing songs on our own as well

The band has evolved a lot because we went from 3 guys to a 5 man band. Jamie Dulin joined to play bass and sax and Colton Caron joined to play keys and synth right before we put Bitzer out. They actually recorded their parts on Coyotes, now they write and record all their parts. Sage Denam joined to play drums and he just took to it right away, he uses and live kit and electronic drums sometimes because we've always liked a mix.

So the approach, the creation process for a song has probably changed...
Fitzgerald: Yeah, what's changed now is that we all write our own parts. We write music as a band more now, as opposed to writing and recording everything broken up. Jamie, Colt and Sage all write their own stuff and most times things just click. Dylan and I feel lucky because the other guys are so talented and we have all been pushing ourselves to get a cohesive sound and break new ground with new ideas and converging styles. The band keeps evolving because we all listen to so much music, all genres and types of artists so we like to try and push things further and get new types of sounds.