The absurd mystery of the strange forces of existence....(Twin Peaks essay pt 1 of 3)

Over the last 24 hours, I've not been able to get the image out of my head...

Every line blurs. No music plays. The absence of sound, as well as coherence, along with a constant uprooting of ones' perspective, ones' grasp - it's all the calling card of David Lynch.

This is the millionth blog post about the third season of Twin Peaks. But I have to write it because I can't stop thinking about it... Not in a traditionally obsessive-way, though. What I've always appreciated about David Lynch's work is that a good portion of the imagery and overall conduction of the actor's bodies and the camera's movement, will become etched into a corner of the cavern of your mind.... forever! I haven't seen Lost Highway in 10 years, and I still see Robert Blake's demonic clown face clear as day in my head.

Before I get too lyrical, or even unhinged in my musings, I want to say something about reboots.

Reboot is possibly the most problematic word (or idea/trend) in modern culture. It is a snare. It is a tease.... It's an endorphin high at first, though... A legion, a cult, a community of fans who fell in love with something (and name ANY show or movie that got rebooted), and gives them a false promise. Yeah. That's the problem. When you even invite the specter of a possibility that something can be qualified as a reboot...then you're raising the hopes of an audience, some to stratospheric heights. It's like being offered the chance to reconnect with an ex-lover you broke up with (on, ya know, relatively good terms), and now you can rekindle that old flame.

Let me repeat. You're not getting a reboot. You're getting David Lynch, unleashed. In the original show, Lynch only directed five of the 30 episodes. He's been quoted voicing his disappointment with much of the twists of its second season--I mean, coldly, to the point where he seemed to be all too eager to wrench it away from that tract and twist things, twist them up beyond recognition. And, yes, beyond most of our abilities to comprehend. 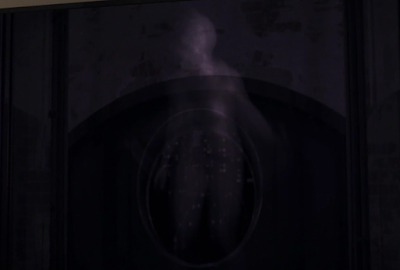 You can't comprehend dreams, not fully. And dream/dreams/dream-imagery/contemplating dreams, are consistently returned-to themes throughout David Lynch's work. There are message boards, reddits, podcasts, think-pieces, everywhere...trying to DEFINE just "What the hell?" is going on...

You are getting David Lynch. Not even just a Twin Peaks' David Lynch. But a post-Mulholland Drive Lynch, a post Inland Empire Lynch, for sanity's sake....

What I'm saying is... This isn't J.J. Abrams giving you all the nostalgia-hits with Force Awakens, and it's not Gilmore Girls' tying up loose ends. It's exactly what has proven to captivate me for 25 years: David Lynch creating cinematic daydreams. I mean, nightmarish daydreams, but lucid reveries that loosen the ties of reality. There's no infatuation quite like that maddening infatuation you'll feel for the sensory-shaking weirdness of that one weird dream you had last night, with its swirl of half-familiar apparitions and skewed architectures.... And purple moonlight. 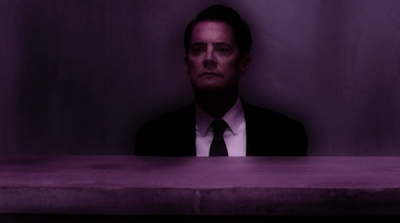 While everyone else will give their take on the first four episodes, I have to say that it isn't worth my while, or your while, quite yet, to dissect it all, quite yet. This is an 18-hour movie... They are not episodes, they are parts. That's why, free from the pressure of network television with its staccato of perfunctory commercial breaks, we are free to slow the pace down even more!

Imagine just watching the first part without the second? Just glimpses of both Coopers, and two perplexing side plots with two respectively gruesome murders, (one more supernatural than the other). And what can we make of the only brief glimpses we've been given of our original comfort zones, the Roadhouse, or the Sheriff's Department? We've seen Shelly glancing at James, two characters who notably had NO interaction (at all, even?) in the original run....What's there to be found? We can't KNOW yet!!

We're only about 23% of the way through the greater overarching film. It's all one long dream. And the reason I'm so electrified right now....by a film, by a television event..., is that it's imposing a mesmerizing and hallucinatory sensation in  my mind. Because I'm here, awake, today, writing you this blog post. And yet I feel like I've only just entered the weirdest dream of any of my life's slumbers, to date....

I'll check back in after Part 10 for a second essay.
Then conclude with a third and final essay after Part 18.