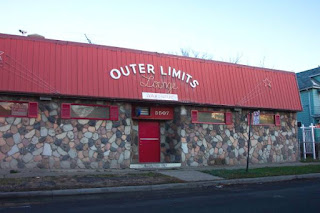 Back in April, when I chatted with singer/songwriter Kelly Jean Caldwell about her band's long-awaited album Downriver, she mentioned that she and husband John Szymanksi (of The Henchmen) were getting ready to launch a record label from out of their Hamtramck HQ, The Outer Limits Lounge, a bar on the east side of the neighborhood that they own/operate. Yes, it's a bar, but Szymanski had also set up a space inside to record bands, and one of the first bands on their roster to lay down some tracks was The Cheetahs. Their album came out a month ago, the second official release on Outer Limits Lounge Records, followed up by this weekend's release of Bad Habit! by WICCANS. (WICCANS features Caldwell on lead vocals, with Aran Ruth.)

"We started this label really just to put out Kelly's Downriver record, the Bad Habit record by WICCANS, and then the new Hentchmen record," said Szymanski. "It's only because of the way things have transpired, recording the Cheetahs and feeling like they were really part of the family, and then being approached with the new full length by the Sugarcoats, that it really now seems like an actual label."

"John and the Hentch dudes, of course, had a small label of their own that released the early Hentch-stuff back in the day," said Caldwell, "so he had a bare bones idea of the business of getting records made."

The simple mission for Outer Limits Lounge Records, at this early stage, is just to be able to play these records at the bar, at the very location they were engineered, and then be able to sell them to folks right there; basically, do some record shopping right then and there while you're at this bar/studio/performance-space. OLL can then be an HQ for the five bands on their current roster to play shows at and maybe do some future recordings. "If nothing else," said Caldwell, "these vinyl records look really good just chillin behind the bar!"


Launching a label inhouse also augments the inherent charm of this venue. With a retro sort of frozen-in-time, no frills, chill/chic vibe inside, it can feel like a head-clearing sanctuary, as much as a place to let out some of your wilder sides for its sporadic live music events.

"I always loved the Outer Limits Lounge and lived down the street from it for years," said Szymanski. "Those shows there were always some of my favorites....and after we bought it, we've had some really great shows and parties with a whole new energy. We're so happy to be able to open the doors and welcome in the neighborhood. It's truly a unique and wonderful feeling to be able to get to know your neighbors..."

"There are people who we've lived amidst for years and somehow never crossed paths with, but now, each day, we're meeting new kindred spirits and fellow humans who inhabit and adore the same little corner of the earth that we do," said Caldwell.

Szymanski and Caldwell have owned the building for a few years now, and have made the space an extention of their home. It's a place where they can kinda hold court and meet with friends and family, or talk about songs and rehearse with bandmates. "It seems like the spirit has remained in the bar and people notice that it's a very homey vibe," said Caldwell."And it seems most patrons are comforted by that, and perhaps that keeps them coming back."

The goal for Szymanski and Caldwell was to have this weekend's grand opening label launch party be a chance to expose the label and its bands, as well as the venue, to "even more rockers, freaks, and curious neighbors..."   Mission accomplished.