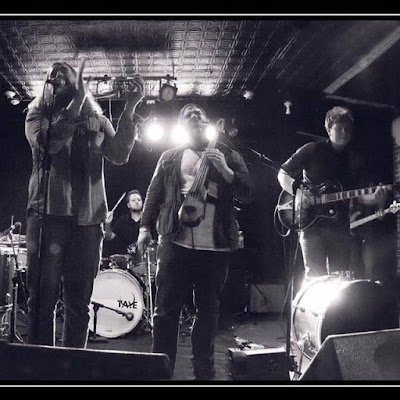 It's getting towards the colder months now... Personally, that's when I start upping the amount of "folk" and "Americana" vibes into my playlists. I need something with a heartbeaten pulse, with crimson blood and air in its lungs; I need something that evokes the briskness of an autumn day. I need a voice where the empathy and weariness is palpable in its intonation. I need something acoustic, thereby organic...human.

Sounds like these can heal... ...and don't we need that more than ever, these days?

The Grand Rapids-based Watching For Foxes will be dropping their next album, Nostalgia in America, at the start of 2018 We're premiering the 2nd single off of that album, titled "Built Broken."

I've had my ears on Watching For Foxes for a couple years and much like Fleet Foxes or Grizzly Bear, they'd already demonstrated a knack for resplendent ambient/jazzy and baroque-styled arrangements of folk-rock, with ruminative lyrics that go from the tender troubadour croon to the bluesier, achier growl. More than their first single, "Breaking Down," this one lets the saxophone steal the spotlight, sweetened through the bridge into its quiet conclusion with a fine violin.

The lyrics are in a heavily ponderous state, poetically assessing the current climate of division and distress, while also unpacking the ways in which we look backward, or regard the past. The traipsing melody yearns for refined perspective, catharsis, truth, hope... Were we built broken, all along?

But like I said, this is music to heal to.... The saxophones are serotonin syrup, the guitars re-regulate the heartbeat and those swooning strings that carry the vocals through the chorus effuse an uncanny clarity up into the brain. WFF wind things down from the typical aerobic time signatures and sound-and-fury riffs of rock music; their songs roll in smooth like a morning's fog and unfurl, and then you, listener, you unfurl... Your muscles unfasten their nervous flex and some kind of new millennium consternation in your soul subsides. The soundscape spreads itself out. It's a restorative sigh made into a folk rock symphony.

And now I'm eager to hear the rest of the album...


http://www.watchingforfoxes.com/
Posted by jeff milo at 5:37 AM