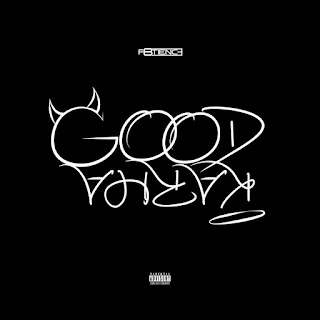 Good Karma is packed with hard-earned epiphanies. Detroit rapper P8TIENCE consistently lives up to that name with raps wrung with honest proclamations, sobering realizations and resolute declarations of intention. P8TIENCE pours out the puzzle pieces of his life and puts it all back together 16 bars at a time, distinctly determined to define his own bigger picture and defy any input or influence that could be misleading. Far from being the typical braggadocio that barbs the rhymes of some rappers, P8TIENCE is creating a memoir of achieving poise within a life where peril's always near. What you hear in these affirming and honest lyrics of faith through struggle boils down to fortitude. How else will you earn Good Karma...

It's worth noting that the two lions that sit as statues in front of the New York Public Library have names. One lion is named "Patience." The other...is fortitude. What I hear on this record is fortitude--fortitude and bravery and boldness and bluntness and a resisting of bellicosity or bitterness. His vocal performance and overall passion/energy basically surges off of the recording here, but's all of a piece with a drive to break through any kind of obstacle. That said, there's also a variety to the production, cinematic sounding gospel ballads ("God Forgives"), to bass-heavy club jams ("Wave"), to slower-grooved arrangements swooning with synths, chimes and pianos over cascading basslines ("I Am").

P8TIENCE was signed to Black Market Entertainment by Shady Records alumni Obie Trice in 2012. From there, he got his fotting in the music biz with national and international tours, garnering attention from the press and attuning himself to the work ethic required to build a career in the music industry. He's toured and performed internationally at this point, including trips to Australia, Canada, and then through Europe (with Obie Trice). He's released two beat-jacking mixtapes as well as two proper albums over the last two years. "8-Ball" was released previously but it's appearing here with a collection of comparably harrowing stories on Good Karma.