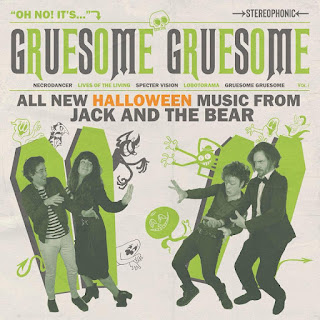 The only thing I might love more than Halloween are the folks who love Halloween more than I already do......The freaky, fun-loving folks who preternaturally channel the spirit of the season, the theatricality of this end-of-harvest-holiday, the slimy-grimy kitsch, the eerie-foggy growls, the yowling-howling, cool-rambunctious, stylishly flamboyant essence of it all...

To tell you the truth, I knew Jack & The Bear could make a killer Halloween record long before they decided, this month, to indulge this specific thematic pageant. And before I share anything more, let's go ahead and listen to the first song from their Halloween EP, Gruesome Gruesome.

Jack & The Bear are so possessed by Halloween on these five songs that it's hard not to get a contact-trance. But the reason they wear the mummy-bandages and vampire-capes so naturally is that it's almost akin to sliding down a hallway to an adjacent room for them...stylistically speaking. Their first two albums have been distinctly heavy on character, ambiance, and implicitly folklore-ish feeling tones--both instrumentally and lyrically. It sort of felt you were always a song or two away from a Halloween party, already.

Imagine Deer Tick, Tom Waits, Beirut, Nick Cave and The Cramps falling into a cauldron together and bring it to a boil and Jack & The Bear will be the stew that it simmers down into...Baroque-feeling arrangements that combine stand-up bass with pianos, trombones, banjos and factor in positively overactive imaginations (inside the heads of the two brothers leading the writing and recording process)--imaginations already inclined toward a sort of Edward Gorey-esque aesthetic of the surreal and the twee and the eerie and the eccentric--and you've got a band that's refreshingly game, by design, for being adventurous in their music and taking the risk to be...dramatic and different! Differently dramatic! Dramatically different!

Now, that's my ear's summation of Jack & The Bear in a nutshell--but it's to prove my point that their donning of Halloween costumes is effortlessly natural. Yes, they do tap into some of the classic tropes of ghostly moans and other ambient sounds from bubbling laboratories, as well as layering on all the candied reverb that was signature to the boom-days of novelty Halloween records from '58-'63--but the majority of each song feels like another chapter in Jack & The Bear's inherently whimsical journey. It's whimsical, but also perilous..., it makes a stop near a haunted house or has to scurry past a graveyard, but the soul of these songs still feels like the J& B you've come to know on previous records...

Next show: Olivia & The Aquatic Troupe, Lagerheads, and Jack & The Bear

We'll all wear costumes this year--but Halloween is always in the heart of Jack & The Bear. And I love that.