STIFF
by Steve Hughes
WSU Press
______________
What's stiff in Hamtramck-based author Steve Hughes' forthcoming collection of short stories is the resolve of several of his characters. What's stiff is the way they're grasping to hold on to a stability that's slipping away. What's stiff is the formidable circumstances that some find themselves stuck in... What's not stiff in these stories is a foundation of reality, as metaphors are admitted free manifestation into 'real life,' making the surreal seem right at home amid the otherwise mundane.

Hughes is a bit of a renaissance man around the local arts and culture scene of Detroit. He co-founded and helps facilitate the Public Pool art gallery, he oversees the Good Tyme Writers Buffet group, and he regularly creates new editions of Detroit's longest running zine, Stupor, an anthology of strange stories curated from patient bar-side/stool-set chats and interviews. Hughes has heard more strange stories than he's told--even though he's been managing to tell quite a few, especially with this book. But with his ears so attuned to astonishing, sublime, scary, or fever-dream-like anecdotes, it allows him to infuse refreshing strangeness into gruff but poignant 10-page portraits of otherwise-highly relatable underdogs, outcasts, anxiety-cases, ambitious dreamers, and affable working-class heroes who find small shreds of sanctuary or fleeting bliss. 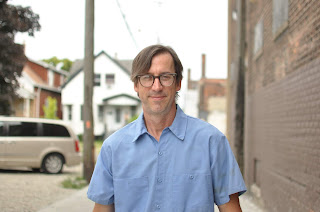 I particularly like Hughes writing style--tending to keep sentences to a rhythmic 9-10 words. It feels like the way in which we would be talking if we were sitting at the bar with each other--in too much of a hurry to get to the good part or the weird part to indulge in floridly long ribbons of adjective-heavy sentences and instead sending you straight to the ID or the Ego of the character and letting them spill their rawest emotions in first-person narration. And there will be particular resonance for workaday artists, for folks who do give a damn about not just the art that they make but even more so the ones who give a damn about the artists, the dreamers, the musicians... Being an artist can be surreal, and it's fitting that Hughes applies his own signature flavor of magical realism to properly portray that. I don't want to give much away beyond saying that you'll find a weird familiarity in even the most fantastic moments of these (often Detroit-set) stories.
______________
Upcoming Events: