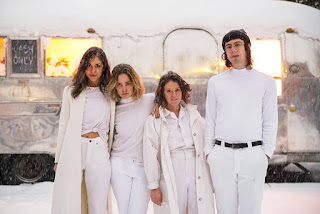 There's always been a haunted vibe to Double Winter's first batch of tunes, like a sort of spell was being cast. The title of their debut EP Watching Eye might suggest a draw from the Tarot deck, but it's involves an augmentation of your own sense of self, in a way, as it refers to a psychological effect upon how you act differently when you're not in the sanctuary of privacy.  In this way, the spell is more like the unspoken thoughts that continue to swirl in your head... "You really WANT to..., but you're SCARED!"
....and the music, then, manifests that angst, beautifully. Minor keys, frenetic rhythms, spectral ambient violin saws, enchanting vocals, nimble and nervy guitar flourishes... "...you wouldn't DARE!"


Double Winter are Holly Johnson, Augusta Morrison, Morgan McPeak and Vittorio Vettraino. The flipside to their new 7" single, "Fall On Your Face," appeared as a slower, murkier demo back in late 2015. They've since been honing their sound into a sleek and agile miscellany of progressive post-punk...and it's perfect for accentuating the beautiful-eeriness awaiting in any gray autumn day or late night where the moon's glow burns through leaf-depleted branches.

Double Winter are releasing this new 7" on Crystal Palace Records
Don't miss their show, tonight, at the Marble Bar....